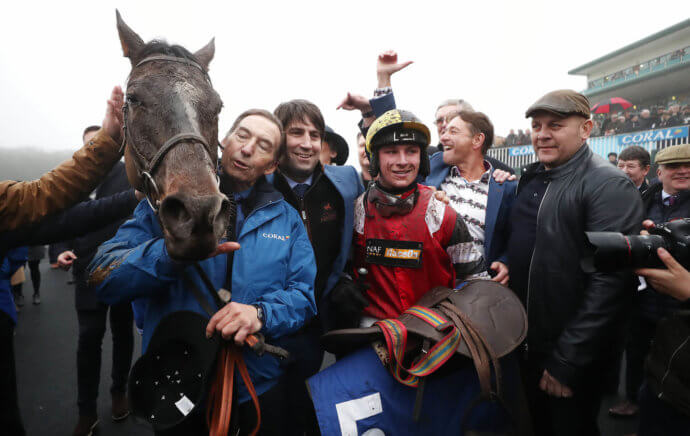 After 54 years of frustration and despair, the Coral Welsh National finally came home at Chepstow on December 27.

Trained by Christian Williams at Ogmore-By-Sea in Glamorgan, the gallant Potters Corner ended the home drought in some style under a fine ride from 17-year-old conditional rider Jack Tudor, staying on strongly in bog-like conditions after hitting the front three from home, seeing off the challenge of the Paul Nicholls-trained Truckers Corner by a length-and-three-quarters, with the runner-up’s stable companion Yala Enki just a length further away in third.

The victory of the 10-year-old Indian Danehill gelding sparked ecstatic celebrations from winning connections, including Welsh rugby stars Jonathan Davies and Gareth Maule, part of a syndicate of rugby-playing owners of the well supported 8/1 shot. Aintree in April for the Randox Health Grand National is now very much on the cards.

There was something tremendously refreshing about Potters Corner’s Welsh National victory. Trained by Williams – in his time a fine jump jockey who finished second to Hedgehunter in the 2005 Grand National on Royal Auclair and was associated with the legendary Denman during his novice hurdle career – the combination of the rock star-like handler and the straight-out-of-school triumphant rider, together with the winner’s owners, seems sure to grab further media attention if the Chepstow hero does indeed bid to follow up on Merseyside in the spring.

Heavy ground would be a big bonus

Ground conditions will be key to the chance of this winner of seven of his 22 races, who signalled his well-being ahead of his Welsh National triumph by landing a three-mile handicap hurdle at the same venue 20 days earlier. It’s not that Williams’ stayer has to have heavy ground to win – he has also won on soft, good to soft, and good ground in the past – it’s just that he handles the mud far better than most other horses, a factor that could give him a significant advantage if the heavens open in the days prior to this year’s Grand National.

That was the case not only at Chepstow but also at Uttoxeter last March, when off a 10lb lower mark on similarly heavy ground and over the half-mile longer trip of 4m2f, he outstayed the dour mare Ms Parfois in a race where only six of the original 19 starters made it to the finishing line.

Potters Corner won the Welsh National off a mark of 145 and will incur a further rise in his rating, all but assuring him of being high enough in the weights to get a run in the Randox Health Grand National. We know he stays, while the jumping frailties that caused him to fall twice when in contention at the business end of the race last season in both the Somerset National at Wincanton and the Eider Chase at Newcastle, appear to be a thing of the past. He jumped really well on his way to victory on home soil.

Potential public gamble on the cards

Given his sporting connections and the potential headline story surrounding his very young jockey, if he does bid for the £1million contest and the ground is on the easy side, it is quite likely there could be a major gamble on Potters Corner. His current ante-post odds range from as low as 16/1* up to a more general offer of 33/1*.

Prior and subsequent to last week’s famous success, Williams’ yard had not been in particularly good form this term, with a very modest 7% overall strike-rate, but that one great triumph will have completely changed the mood at his Welsh training base. With confidence surely sky high after his Chepstow heroics, there could very well be more joyful moments to come during the second half of the 2019/20 campaign.