After the shock of the last Grand National being cancelled, we take a look at four of the 2021 Grand National favourites that should figure high up the betting market. As we build-up to the 2021 Aintree Grand National, the betting is starting to heat-up. At this stage, which are the main horses to look out for?

As some still say, Tiger Roll is the favourite to win the 2021 Grand National. Though now, there are a new set of favourites in the ante-post betting market since his withdrawal from the race entries.

Cloth Cap is the new favourite, other runners have good chance to win too, here you can find the list of the top favourites and predictions. We will keep the page regularly updated with the latest Grand National 2021 odds on the favourites in the ante post betting market.

Jockey Davy Russell jumps the last fence on Tiger Roll on his way to winning the Grand National horse race on the final day of the Grand National Festival at Aintree Racecourse in Liverpool, northern England on April 14, 2018. / AFP PHOTO / PAUL ELLIS @SCANPIX

Who is the main Grand National favourite?

The favourite for this year’s Grand National is Cloth Cap. He has won his last two races, including the prestigious Ladbrokes Trophy at Newbury, and is trained by Jonjo O’Neill who won the race in 2010 with Don’t Push It.

Top 5 Favourites Runners and Odds for 2021

The 2021 Grand National at Aintree is almost upon us. With the weights published and the Cheltenham Festival having passed, the picture is much clearer now.

Three of the top five in the market are owned by JP McManus, while one is owned by three-time Grand National-winning owner Trevor Hemmings who now has the hot favourite.

The gamble on Cloth Cap is gaining traction all the time. Form wise, it’s easy to see why. Cloth Cap was outstanding when landing the Ladbrokes Trophy at Newbury in November over 3¼ miles. He was even better in his prep last time out though, and the timing was very pertinent.

In landing the Premier Chase very easily from the front at Kelso, he reached a new level. The handicapper after that win moved him up to a rating of 162, however by then the National weights had already been published.

Cloth Cap gets to run here off a mark of only 148, some 14lbs lower than he rightfully should, which makes him very well handicapped indeed.

The first of the JP McManus runners, Any Second Now is at just the right age for this race. Experienced with 18 chase runs under his belt, he has appeal but also some glaring negatives.
Any Second Now has done most of his winning over much shorter trips. He also fell when taking part in the 2019 Irish Grand National. Furthermore, Ted Walsh noted that the improvement in his form last time out was as a result of him running in a smaller field, something he will not get at Aintree.

McManus’ second runner is the interesting Minella Times. He’s only eight and has never won beyond 2¾ miles, which aren’t great signs in the context of this race.

That said, he handles big fields and is improving all the time. He’s also trained by Henry De Bromhead who had such a wonderful Cheltenham Festival and is in flying form.

There are two distinct ways to weigh-up the chances of Burrows Saint. On the one hand, he’s only 8, is inexperienced overall and not in the best form of his life.

On the other hand, he is trained by Willie Mullins and has some key pieces of form. In April 2019, Burrows Saint won the Irish Grand National over 3m5f against 29 rivals. That really paints a picture of a horse who can handle this fine.

Kimberlite Candy has more of a ‘classic’ Grand National profile and must be considered a leading contender. Tom Lacey’s gelding has been aimed at this for some time now.

He has twice run well and been runner-up over the Grand National fences, both times in the Becher Chase. He’s by Flemensfirth who is a great sire for this race and his form stacks up at the weights. His win in the Classic Chase at Warwick shows his staying power, and he should be around 7lbs well-in.

Grand National Who to Bet On?

On basic form and at the weights, it would be hard to put anybody off backing Cloth Cap. He is officially 14lbs well-in at the weights, and while 4/1 is mightily short for a Grand National favourite, as his jockey Tom Scudamore points out, if he had a stone in hand in any other handicap, he’d be much shorter than that price.

The Grand National is unique, however. There will be 39 runners against Cloth Cap and he’ll need to stay further than before and negotiate these fences.

The more solid bet based on the price (14/1) and on trends is Kimberlite Candy. His past form in the Becher and his obvious stamina make him a potential Grand National star. JP McManus hasn’t always had the best of luck in this race, but he may have a gem here.

On a hat-trick now having landed the Welsh Grand National and its earlier trial is Secret Reprieve. Off a lightweight and with stamina to burn, he must be considered a leading contender.

Also in with a shout is Grade 1 winner The Storyteller. Denis Foster’s charge has some top form with Kemboy and Flooring Porter, both top-class animals, while going this far for the first time may bring about more improvement in him.

How Many Favourites Have Won the Grand National?

As you’ll see from the list below, a grand total of only 14 favourites or joint-favourites have landed the Grand National since the turn of the 20th century.
You’ll also see from the odds, that a 4/1 shot such as Cloth Cap is a very rare winning favourite. 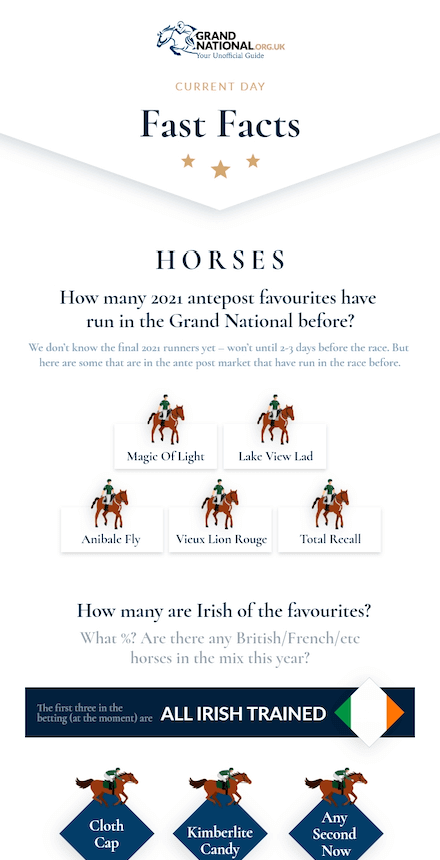 Grand National predictions are what discerning punters try to find to make informed betting decisions. Whether you see content put together from Grand National experts or teams of long-term horse racing tipsters, it is crucial that you find trusted sources. Sometimes, it is better not to always go for the favourites.

What percentage of Favourites place in horse races? On average favourites win about 35% of horse races. But, that win percentage can fluctuate based on the distance, surface, class, etc.

These experts make Grand National predictions based on several factors:

Note that no Grand National predictions are 100% foolproof, so bet at your own risk. Nevertheless, getting information from reliable sources can indeed boost your winning potential.

However, key Grand National trends are always worth looking back on too – look for key trends to find the best profile of past Grand National winners. Afterall, if a certain horse (age, weight, form) has performed well in the race many times in the past then there is a big chance a horse with a similar profile will also do well.

Take a punt on the world’s most famous race and bet on the 2021 Grand National! For a few extra tips and best odds, have a look at our Grand National Ante post betting tips.

*We hope you enjoyed the selection bookies we recommended! Just to be clear, grandnational.org.uk may collect a share of sales or other compensation from the links on this page.