The Grand National is the biggest day of the year for racegoers, as thousands will pack out the Aintree grandstands to watch the famous race unfold. Spectators from far and wide would attend the famous racecourse for the big day itself, while others may be tempted to visit on one of the other two days of the meeting.

One of the biggest fashion days of the year in Liverpool comes on Ladies Day, as spectators would be dressed to the nines wearing a hat or heels. However, dressing up isn’t essential for all racegoers, as there is actually no style code for the Aintree Grand National. 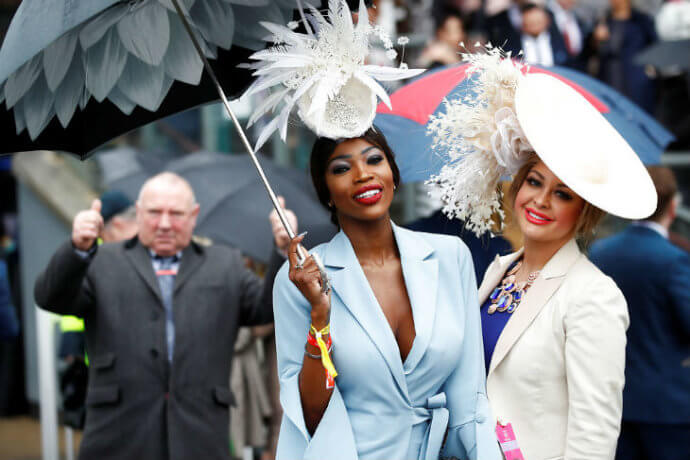 What To Wear To The Races?

As we mentioned, there is no strict dress code for the Grand National, but that doesn’t stop people from using the racing as an excuse to dress up. Ladies Day is one of the biggest fashion days of the year, as women from far and wide head to Merseyside for a day at the races. The most popular fashion choices for women at the end are formal dresses or jumpsuits. Many women would also use a blazer to complete their outfit, which is also a wise choice given that Aintree at the beginning of April isn’t likely to be a blisteringly hot day. Aintree is also revered for its hats, which means that the perfect outfit wouldn’t be complete without a bold and extravagant piece of headwear.

For those not wearing dresses, the preferred option is always smart, with a suit the best possible decision. Tweed is among the most popular options for male racegoers, as the material is more likely to keep you warm in the colder weather at the track. Ties aren’t an essential part of the etiquette, with some opting against wearing one. Meanwhile, hats again are prominent with male visitors, with the flat peak caps being more popular in this modern era following on from the success of BBC drama Peaky Blinders. Smart shoes are essential for the big day at the racing, but trainers are still allowed, as there is no dress code.

Grand National Day on the Saturday is undoubtedly the biggest race day of the meeting, but it’s Ladies Day on Friday that is typically among the most popular days for racegoers. With fans attending the course from around the United Kingdom, visitors dress up to show off their fashion.

Once again there is no dress code for Ladies Day at the meeting, but this would be the perfect day to wear your best outfit, as there are prizes to be won throughout the day. Visitors will all be eligible to win the Style Award competition, which is also followed throughout the day on the live broadcast of the meeting on ITV. The more show stopping the outfit, the more chance that there is to stand out from the crowd. That means that it is the perfect day to try out new colourful dresses and shoe combinations, and you shouldn’t think about wearing the black dress that is more used to an outing at the works do.

Standing out from the crowd for males is much more challenging, but the awards tend to look for more classic outfits, which means looking at two-toned shoes and adding more colour to your outfit. Once again, the hat is a must for any male looking to win the style competition. A top hat is more likely to stand out to the judges of the style awards, which means leaving the flat cap at home.

As the Grand National meeting is one of the biggest social events of the year, there have been many celebrities attend the event throughout its history. Racegoers attending Aintree would be able to use some of the most stylish as inspiration for their outfits.

One of the most popular celebrities has become Coleen Rooney, who has been dubbed the ‘Queen of Aintree’. She very rarely misses the meeting, and has been seen wearing orange and black lacy dresses down the years. Meanwhile, legendary television presenter Cilla Black showed fans how to embrace the hat culture at Aintree when she wore a beautiful lilac piece of headwear at the 2014 meeting.

Famous males to use as inspiration include Paddy McGuinness, who rocked a blue three-piece suit with a pink tie back in 2015. The sunglasses just completed his outfit. Former Liverpool defender Jamie Carragher is another that opted for a three-piece suit, but instead opted for a vintage brown colour.