Both codes of horse racing (jumps and flat) in the UK and Ireland include a jockeys’ championship which runs throughout the season. The jockey with the most winners at the end of the campaign is crowned the Champion Jockey.

The National Hunt Jockeys’ Championship has been dominated by Tony McCoy, who is the leading jumps jockey championship winner with 20 titles before retiring in 2015.

McCoy’s retirement opened the door for Richard Johnson to claim the title in 2016. Johnson had to settle for second place behind his rival a remarkable 17 times, but finally won the award four times before retiring too.

The Jump Jockeys Championship is decided on ridden winners in National Hunt races from 30th April 2022 to 29th April 2023. Brian Hughes regained the accolade during the 2021/22 season, and the trend is expected to continue.

National Hunt Jockeys’ Championship betting was released ahead of the season, and some bookmakers are still quoting odds. As of August, Brian Hughes (4/11 favourite) leads the standing, but Sean Bowen (4/1) and Harry Skelton (6/1) both remain in contention. The campaign will run through to the end of April 2023. 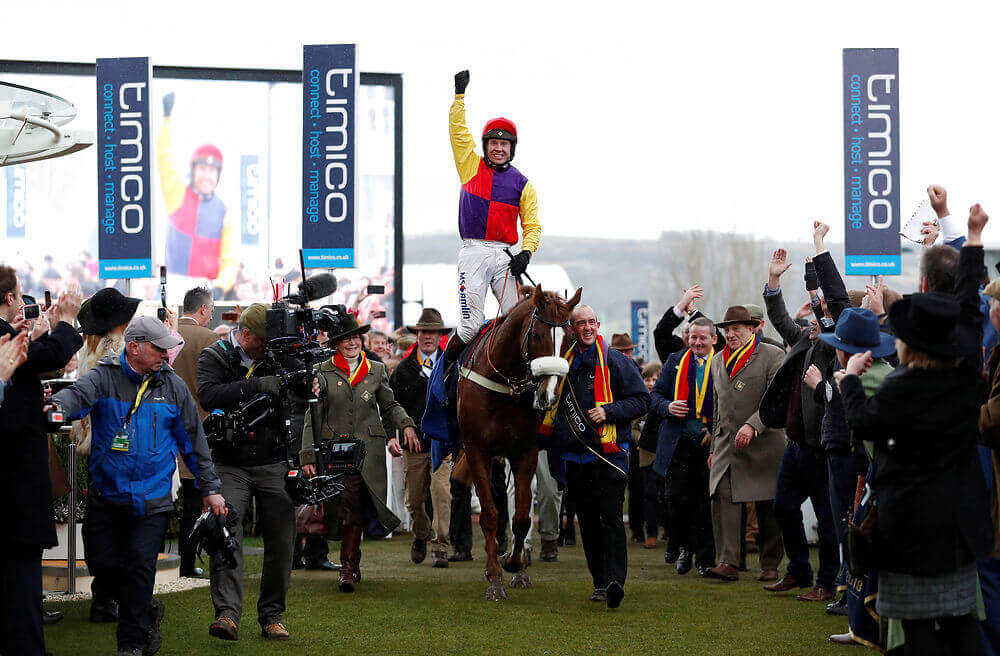 The Conditional Jockeys’ Championship runs in National Hunt racing for jockeys who are able to claim weight for their ride.

Conditional jockeys can claim 7lb on their ride until they have ridden 20 winners. They are able to take 5lb off until they have 40 winners to their name, while it is 3lb up until they reach 75 winners. An additional 3lb is also taken off for Conditional Jockeys with fewer than five winners and are riding for their own stable.

Kevin Brogan and Liam Harrison led the way in 2021/22, with Brogan eventually winning out in the fight for the title. Fergus Gregory and Ben Godfrey are other names which will hope to challenge for the crown this season.

The Conditional Jumps Jockeys Championship is decided on ridden winners of National Hunt races from 30th April 2022 to 22nd April 2023.
The new jumps season will see up-and-coming jockeys like Chester Williams, Luca Morgan and Niall Houlihan as popular choices to be the top jumps conditional jockey.

It takes a great amount of skill and dedication to win the Flat Jockeys’ Championship. The most recent award was decided on winners ridden on both the turf and all weather from the Guineas Festival on 30th April 2022 to British Champions Day at Ascot on 15th October 2022.

When you go through the course of history, some of the great flat riders have been Champion Jockeys, including Gordon Richards, Scobie Breasley, Lester Piggott and Pat Eddery. More recent winners include Frankie Dettori, Kieren Fallon and Ryan Moore.

Many eyes have been on Hollie Doyle in 2022 as she looks to become the first female jockey to win the jockeys’ title race, and she’s certainly giving her backers a run for their money.

The British All-Weather Jockeys’ Championship takes place from late October through to late April. The winner is decided by the jockey who rides the most winners in this period on all-weather tracks.

Ben Curtis has has been forced to undergo shoulder and foot operations, so improving the prospects of David Probert and Hollie Doyle as they vied to be All Weather top jockey 2022.

The AW Jockeys’ Championship is decided on ridden winners of flat races taking place on the All Weather between 19/10/21 and 15/04/22:

*Statistics are the final standings from 2022.

In Ireland, Willie Mullins and Gordon Elliott have been involved in a fascinating duel for the Irish National Hunt Trainers Championship in recent years. Those two men were again locked in a battle for the title in 2021/22.

*We hope you enjoyed the selection bookies we recommended! Just to be clear, grandnational.org.uk may collect a share of sales or other compensation from the links on this page.