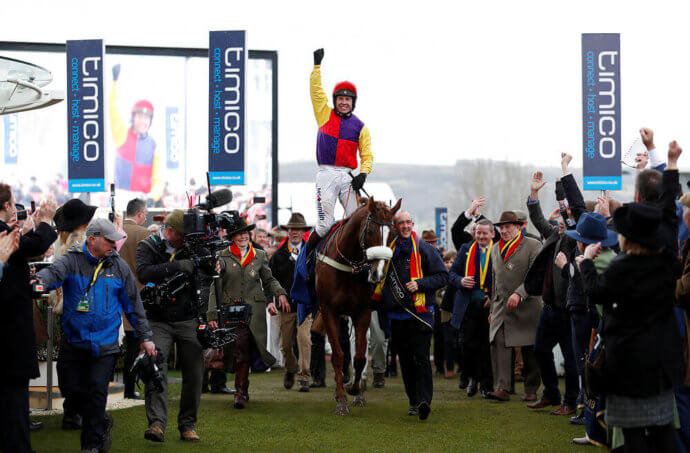 As a Grade 1 non-handicap it is impossible to argue against the fact that the Cheltenham Gold Cup is the highest quality steeplechase, not just in Britain, but in the world. Few winners of that great race have taken their chance in the mile longer Grand National, and those that have, have enjoyed mixed fortunes.

There’s a pretty good chance though that this year we could see one, or possibly two Gold Cup winners facing the starter at Aintree on April 4 for the £1million Randox Health Grand National.

The 2017 Gold Cup hero Sizing John, trained in Ireland by Jessica Harrington, has only run four times since. He followed up his Cheltenham triumph with two victories over old rival Djakadam; first edging home by a cigarette paper in the Grade 1 Punchestown Gold Cup just over a month later, then scoring by seven lengths from the Willie Mullins-trained star on his seasonal return in December 2017.

Things went pear-shaped after that however with Sizing John running as if something was wrong at Leopardstown just 18 days later when odds-on but only seventh of 12 behind Road to Respect in the Grade 1 Christmas Chase.

Two years and three days later, on New Year’s Eve, just two weeks ago, the now 10-year-old returned to the fray in a 2m4f Punchestown Hurdle and was going well in second when he fell 3 out in the race won by Burrows Saint.

Hardly the ideal return for this very smart horse, but he is reportedly none the worse for that tumble. While he faced a much lesser challenge at Punchestown than the potential 30 fences and four-and-a-quarter miles at Aintree, connections were still pleased with the Midnight Legend’s first run in such a long time.

“Barry [Geraghty] was delighted with him,” Jessica Harrington told the Racing Post. “He said he came alive at the third last. He jumped the hurdle perfectly but gravity took over! He did everything right up till then. Races like the Kinloch Brae Chase at Thurles [January 19] and the Galmoy Hurdle at Gowran Park [January 23] are there for him.”

Sizing John is offered at up to 33/1* in places for the Grand National but has not yet been announced an intended runner.

River on course for National challenge

One Gold Cup winner who looks a likely Grand National runner is the 2018 hero Native River, the bold front-running chestnut gelding trained in the West Country by Colin Tizzard. Prior to his memorable defeat of Might Bite in that heartstopping Gold Cup battle of two years ago, the Indian River gelding had already signalled his Randox Health Grand National credentials when staying on powerfully to land the Welsh National at Chepstow over nearly 3m6f in testing ground, under the massive burden of 11st 12lb.

Regular rider Richard Johnson was aboard again when partnering the dashing chaser to third in Sizing John’s Cheltenham Gold Cup a few months later, but the pair returned to Cheltenham the following year to enjoy their greatest moment, to date. Native River was fourth to Al Boum Photo in last year’s Gold Cup and returned to winning ways on his seasonal reappearance at Aintree last month (on the Mildmay course) when routing Black Corton by 33 lengths in the Grade 2 Virgin Bet PriceBoosts Many Clouds Chase.

Prior to his recent Aintree success, assistant trainer Joe Tizzard told reporters: “We’ve talked about going for the National a lot at home but we just want to get him back first. Garth and Anne [owners] were against it, but they’ve come round to things, though it’s something we haven’t really discussed too much with them yet.”

They’ve probably discussed it plenty since then though, and the Grand National could very well be on the radar this time. It would be some sight to see such a high-class horse front-runner taking on the biggest steeplechase challenge of them all in his usual have-a-go style. Bookmakers are divided about his chance as he’s sure to be handed a big weight and has never jumped the unique fences before in public.