What Made Red Rum Such A Public Favourite? 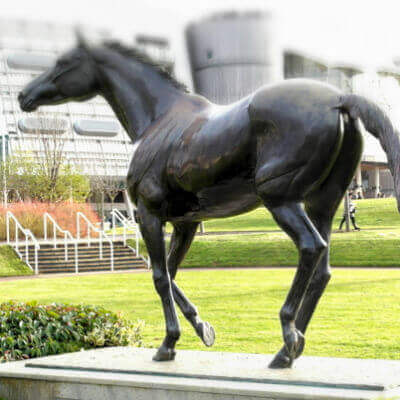 Photo (cropped) by vegaseddie is licensed under CC BY 2.0

Tiger Roll is looking to match the achievement of Red Rum when he lines up in the Grand National in April by winning the famous steeplechase for a third time.

Although that feat will be something special, it is worth pointing out that ‘Rummy’, as he was affectionately known, also finished second twice in the race where he always produced his best form.

Trained on the beach at Southport

Red Rum was trained not far from Aintree at Ginger McCain’s yard in Southport. The chaser suffered from a bone disease which meant that McCain had to use unconventional methods when it came to training the horse.

McCain would often take Rummy down to have a gallop on the beaches in Southport. The water was thought to be great for rehabilitation. In many ways, McCain was ahead of his time as some trainers now use indoor swimming pools for their horses to recover from injuries.

First success in the Grand National in 1973

The 1973 Grand National is many racing fans’ favourite running of the steeplechase in history. It included Australian chaser Crisp who was conceding weight to the rest of the field. He took up the running and looked set to win the contest.

At one stage of the race, Red Rum had 30 lengths to make up on his rival but as he got into the closing stages, he kept eating into Crisp’s lead. The younger horse was full of momentum on the run-in to the finish line and got up by ¾L to begin his incredible story in the race.

Defending his crown in the 1974 contest

Winning the Grand National is no easy feat. Coming back 12 months later with extra weight is even tougher. Red Rum managed that in 1974 carrying 12 stone.

Ridden by Brian Fletcher once again, Rummy came out on top ahead of L’Escargot. Later that month he completed an incredible double by prevailing in the Scottish Grand National at Ayr. That proved it wasn’t just at Aintree that he was able to produce his best form in these staying races.

After finishing second in the 1975 and 1976 renewals of the Merseyside contest, Red Rum’s chances of a third National looked to have slipped away from him. The people’s champion had one last big day in him though, as he went on to win the 1977 contest.

With Tommy Stack on board this time, due to a fall out between McCain and Fletcher, Red Rum had top weight of 11 stone 8lb and was able to successfully give weight to the rest of the field again.

Red Rum continued to be a superstar after retirement

Red Rum was being prepared for another shot at the famous steeplechase in 1978, however, he suffered a hairline fracture the day before the race in his final gallop. As a result, Connections opted to retire their horse, drawing an end to what was a spectacular career.

Rummy still continued to be in high demand. He appeared on television shows, opened supermarkets and travelled the country so fans could have their picture taken with the legend.

When he died in 1995 at the age of 30, he was buried at the winning line at Aintree. There is also a statue at the Merseyside racecourse of the horse that the whole nation fell in love with in the 70s.

Although no horse will ever be able to hold a place in the public’s hearts like Rummy did, Tiger Roll will be roared on by thousands of supporters at Aintree in April.