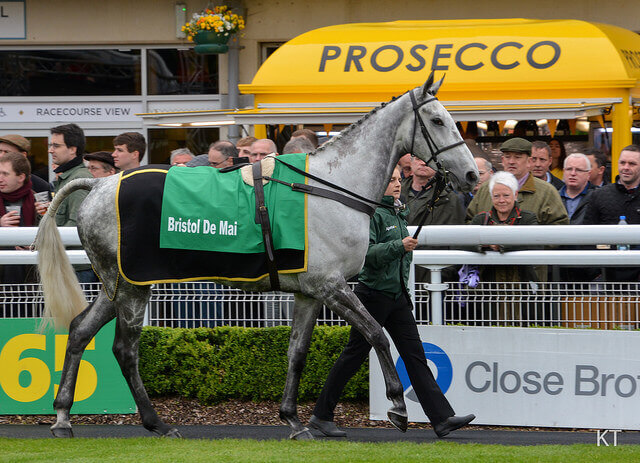 While his conqueror Santini emerged a leading contender for the Cheltenham Gold Cup in March, Bristol De Mai gave the impression in Cheltenham’s Cotswold Chase that he would relish the unique test that is the Grand National at Aintree.

Of course having given Santini 2lb at the weekend connections could still see value in a tilt at the Gold Cup in which the popular grey finished a gallant third last year. Even if that is the case, the now nine-year-old must be seriously considered as far as a tilt at the National.

A top-class performer, Bristol De Mai has won two Grade One Betfair chases at favourite venue Haydock including when beating former Gold Cup winner Native River in 2018 and when winning the 2017 edition by 57L. In finishing gallant seconds to firstly Lostintranslation and now Santini, both second season chasers, one must wonder if he will again come up just short in jumping’s Blue Riband.

As far as the National the imposing grey looks ideal. The fact that he is ground versatile is a bonus as the notoriously unpredictable North West weather is never something to be confident in. Although he has never gone beyond the 3m2½f Gold Cup distance he is a genuine stayer who would likely relish the trip. He possesses a high cruising speed but little turn of foot which is often his Achilles heel against the very best. Finishing kick is not a necessary asset in the National and one could well imagine his strong galloping style putting some of the less classy runners in the race under severe pressure.

Of course a degree of guesswork, trust, or a bit of both is required when a horse tackles these fences for the first time but the fact that 10 of the last 12 winners were having their first run in the race to some degree eases concerns. Bristol De Mai is a fantastic jumper of ordinary fences and he frequently jumps them with plenty of room to spare, which is certainly something to note when going over fences higher than conventional ones. The fact that he is trained by Nigel Twiston-Davies who is a dab hand when it comes to schooling for the National fences is also a plus. The Cheltenham based trainer has twice won the National and had a host of others run well in this and other races over the unique fences during seasons gone by.

Tiger Roll will bid for a historic third Grand National but he is currently rated 172 means so as it stands Bristol De Mai would get 2lb from the ante-post favourite. If the two of them met in a 3m race over conventional fences at those weights one could be pretty certain that Bristol De Mai would be a short-priced favourite. Of course Tiger Roll’s two wins can’t be underplayed with his now legendary versatility and toughness making him the one they will all be looking to beat come April, but at 50/1 with bet365 it is worth taking a punt on Bristol De Mai’s participation. If he rocks up in April expect him to be around a quarter of those odds.