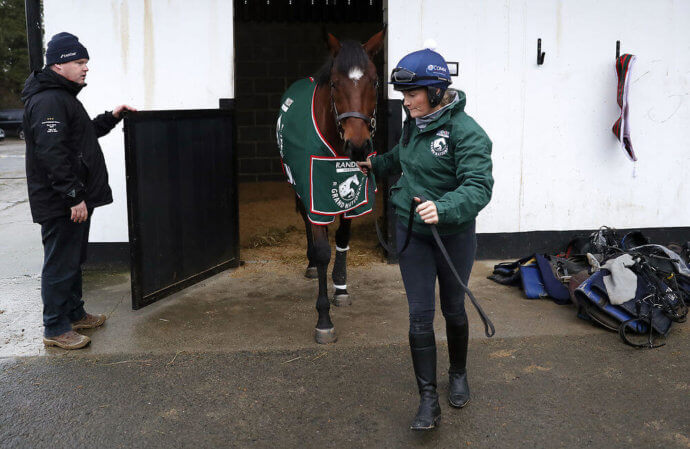 Connections of Tiger Roll insist the two-time winner is far from certain to line up in the Randox Health Grand National following Tuesday’s weights announcement.

Gigginstown House Stud racing manager Eddie O’Leary expressed his disappointment following the publication of the weights for the Aintree spectacular, before suggesting a decision on Tiger Roll’s participation is likely to be made after the Cheltenham Festival.

As expected, Tiger Roll will be carrying top-weight should he bid to become the first three-in-a-row winner of the Aintree marathon.

The BHA handed him a mark of 170 for the race and he will carry 11st 10lb on his back – five pounds more than last season.

He held off the Jessica Harrington-trained mare Magic Of Light by just over three lengths last spring, with that rival set to benefit from a 4lb turnaround at the weights.

The weights were compressed by the BHA, with Tiger Roll 1lb better off than might have been the case.

Speaking after the weights were announced, Eddie O’Leary made it clear he is less than impressed with Tiger Roll’s rating of 170, akin to that of a Cheltenham Gold Cup winner.

Tiger Roll is in line to run at Navan this weekend, his first run since Aintree last year. Any decision on his participation is set to be made after the Cheltenham Festival.

“Hopefully he comes through Navan on Sunday OK, then go on to Cheltenham and hopefully that all goes OK and if he’s OK at Cheltenham then we’ll make a choice,” said Eddie O’Leary.

“It (the weight) is a massive factor – we’ve said the whole way through this horse is on a very unfair rating.

“He was raised 12lb last year for winning a cross-country race. He was rated the far superior horse in the cross-country race, so why a 12lb rise in the weights? It was a reaction to the way he won the Boyne Hurdle last year, which was a surprise to all of us.

“The last time this horse ran in a (regulation) chase was two and a half years ago and he pulled up off 150. He’s obviously improved for the Grand National discipline and cross-country, but to rate this horse as a winner of a Gold Cup is ridiculous.”

It was always expected Tiger Roll would carry top-weight and O’Leary has no complaints on that score. He does though feel it would be unfair to ask his teak-tough star to give weight to a Cheltenham Gold Cup winner should connections of Native River decide to run.

“The Grand National is the biggest race in the world, it’s bigger than any one horse,” he added.

“It’s not a welfare issue – he was always going to carry 11st 10lb, we understand that, but it’s how he’s compressed in regards to other horses.

“Native River – a Gold Cup winner – hacked up last Saturday. He’s been compressed 2lb and we have to give him 4lb. I see something very unfair there.”

Elliott has no complaints

One man without a cause for concern is trainer Elliott, the Cullentra trainer quick to distance himself from the Gigginstown stance.

“A blind man would know he’s going to carry 11st 10lb. We were obviously hoping for a pound or two less, but Martin (Greenwood, BHA chase handicapper) and his team have a job to do,” said Elliott.

“We’re 4lb worse off with Magic Of Light, who was second in the race last year, so it’s probably fair play – I’ll not be giving out.

“Everyone has got their own opinion. If it’s left to me he’ll run. He’s a household name and it’s the most famous race in the world.”