Gigginstown House Stud have confirmed that Tiger Roll will not run in the Grand National at Aintree next month owing to their perceived ‘unfair weight burden’ on the two-time winner.

Michael O’Leary’s operation released a statement informing that Tiger Roll is being removed from the Grand National at the latest forfeit stage.

The powerful Gigginstown operation had attempted to exert pressure on the British Horseracing Authority’s chief handicapper Martin Greenwood in the run-up to last month’s weights announcement for the April 10th showpiece.

The O’Leary’s – owner Michael and racing manager Eddie – suggested they would only permit Tiger Roll’s hat-trick bid if they were satisfied with his allotted weight in the Grand National.

Tiger Roll won his first Grand National in 2018, beating the Willie Mullins-trained Pleasant Company by a head carrying 10st 13lb, before he followed up in the 2019 running with a more emphatic success, coming home two and three-quarter lengths clear of Jessica Harrington’s mare Magic Of Light, this time carrying 11st 5lb.

His chance at the hat-trick in 2020 was thwarted as the great race was cancelled amid the early pandemic lockdown in Britain.Tiger Roll was raised 7lb from his most recent Aintree victory and would have been due to carry 11st 9lb in the Grand National this year. 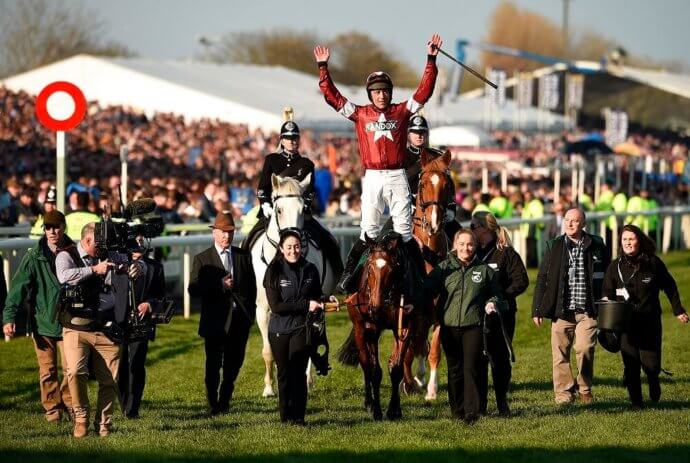 ‘Reputation rather than form’

The operation came out in support of Elliott on Monday, though the Cullentra handler is facing an uncertain future as an IHRB (Irish Horseracing Regulatory Board) investigation takes place.

Now Gigginstown have confirmed that Tiger Roll won’t bid for history and a third straight Grand National win – or the chance to equal Red Rum’s tally around Aintree.

The 11-year-old could instead be retired in the coming weeks, with a planned appearance in the Cross Country Chase at the Cheltenham Festival his possible swansong now.

The Gigginstown statement read: “We made clear that if Tiger Roll was rated in the 150s, which is what his form and age now warrants, he would be allowed to run in this year’s National and go for a historic three in a row.

“However, the handicapper has decided to rate him on his reputation rather than his form – which we fully accept is his prerogative – but we have a duty of care to Tiger, and so we will not ask him to carry an unfair weight burden especially as he gets older and his form declines.

“We therefore regret to announce that Tiger Roll will be removed from the Grand National entries at Tuesday’s forfeit stage. We hope he will run next as planned in the Cross Country race at Cheltenham, where we hope he will enjoy himself and run well.

“After that, we will consider his future wellbeing, which may involve retirement if his handicap mark is not adjusted to more fairly reflect his age and form over the past two seasons.”

With Tiger Roll out of the 2021 lineup – check the updated list of Grand National Runners here.