Three of the Best Runners at Aintree

The Grand National is the most iconic steeplechase in the world and each year in April it creates a major sporting buzz, unmatched in terms of widespread appeal amongst the sporting community as a racing event.

Winning the Aintree showpiece guarantees a place in the pantheon of Grand National history. Some winners are, of course, more memorable than others. Here we look at some magical names from a real golden era at the Aintree Grand National.

Quite a few of the Aintree fences have a story to tell in how they get their names and none more so than Foinavon – one of the smallest fences on the National course but with a tall tale to tell.

Foinavon was a notoriously methodical jumper who arrived at Aintree in 1967 as a 100/1 outsider.

He began to become tailed off on the second circuit and looked destined for a bit-part role. As the leaders approached the 23rd fence the riderless Popham Down veered straight across the fence without jumping it causing all sorts of trouble as he did.

Many of the leaders were forced to slow down and either fell or refused to jump the fence that we now know as Foinavon, with the chasing pack also suffering as a result.

John Buckingham meanwhile on Foinavon was able to see the carnage as he approached and navigated around the trouble to take the lead as the only runner that jumped the fence at the first time of asking.

Of the fallen horses, 17 remounted to give chase to Foinavon but they couldn’t catch up in time and a Grand National legend was born with the most unlikely of wins.

Perhaps no horse quite captures the spirit of the Grand National like Red Rum.

Ginger McCain’s legend at Aintree was born form the remarkable feats of the horse that triumphed three times in 1970’s while also finishing runner-up twice.

In 1973, Red Rum won for the first time, reeling in long-time leader Crisp in the dying strides. He won again a year later before twice settling for second spot.

Brian Fletcher had partnered him to victory twice but he suffered the wrath of McCain and it was Tommy Stack on board in 1977 as he completed his hat-trick.

Red Rum travelled supremely and jumped like a stag, coming home first as legendary commentary Peter O’Sullevan declared “it’s hats off and a tremendous reception – you’ve never heard one like it at Liverpool.” 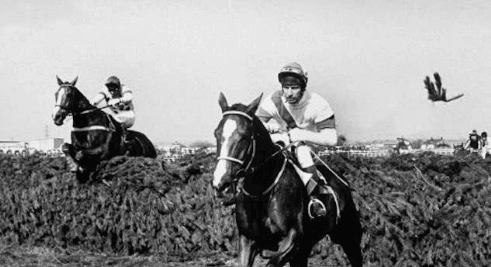 Rarely has the Grand National tugged at the heartstrings as fervently as when Aldaniti and Bob Champion prevailed in 1981.

The horse had suffered chronic injuries and was seemingly on the road to nowhere, while Champion had two years previously been diagnosed with cancer and was given just months to live.

The jockey revealed that throughout the darkest days of his illness the dream of riding the winner in the Grand National had kept him going.

Together, Aldaniti and Champion provided one of the most fitting Grand National results of all time – a true triumph over adversity. Such was the compelling nature of their story that it was later turned into the hit movie ‘Champions’.