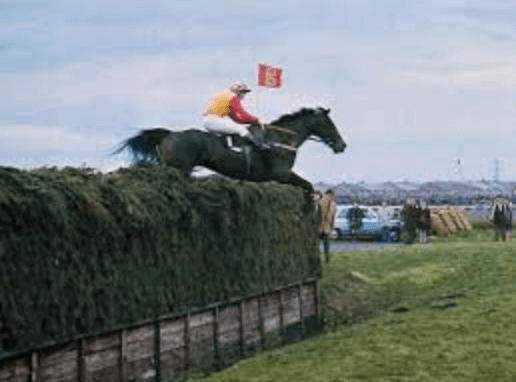 Almost 50 years have gone by since Crisp became one of the most notorious Grand National runners-up of all time, and jockey Richard Pitman admits he still comes in for criticism even now.

The big Australian chaser had won a Queen Mother Champion Chase at the Cheltenham Festival in 1971, but couldn’t secure the Gold Cup that owner Sir Chester Manifold craved so much.

Having perhaps failed to stay three-and-a-quarter miles in the Blue Riband, eyebrows were raised when Crisp featured amongst the entries for Aintree in 1973.

He would carry top-weight of 12st in the National and Pitman, together with Fred Winter – who was handling Crisp’s training in Britain – agreed to try and make the running.

Crisp was a wonderful jumper and liked to dominate, with Pitman saying they’d agreed to try and slow things down in front in a bit to see out the marathon trip.

Crisp established a big lead before halfway and was some 30-lengths clear by the time Red Rum – seeking his first win at the time – emerged from the pack to try and close the gap.

Crisp still held a hefty lead coming to three out, but fellow joint-favourite Red Rum under Brian Fletcher were now the sole threats in a surreal contest.

Crisp’s jumping helped protect his lead but, on the long run to the famous Aintree elbow, weary legs were beginning to set in.

Pitman drew his whip and gave the leader a wake-up call, but it resulted only in Crisp swaying left away from the persuader and becoming unbalanced before the running rail was there to guide home.

It opened the door for Red Rum, all the time inching closer and closer to the leader.

As Crisp began to wilt, Sir Peter O’Sullevan declared the second was ‘going to get up’ and so it was, Red Rum going on to land the first of three Aintree Nationals for trainer Ginger McCain, while Crisp and Pitman were left to settle for silver medals.

The Racing Post recently listed the 1973 Grand National as one of their ten contenders for the ‘greatest race of all-time’ and, as part of the series, Pitman gave his thoughts on the race.

“I still get criticism to this day, but I don’t care because everyone is entitled to an opinion and I know what was said between Fred Winter and myself before the race,” he said.

“We planned every single angle, and in the end we decided we’d make the running and try to slow the race down in order to try to get the trip with 12st.”

He doesn’t think about it too often, but Pitman admits he got it wrong on the day.

“You make lots of snap decisions and I think most of mine were correct, but picking up my whip before the Elbow was a stupid thing to do and I hold my hands up,” he added.

“I shouldn’t have used the whip at all. He was so big and so heavy that when you take your hand off one rein to give him a crack, you lose him. He fell away from me and, if I had just sat and pushed him out to the Elbow, then given him a crack when he had the running rail, fine, but you can’t change it.”

By Enda McElhinney
Aintree is set to stage racing over Christmas from 2023, it has been confirmed by the Jockey Club. The home of the Grand National will replace Huntingdon’s traditional December 26th meeting from next year, ensuring racing at Aintree for the first time on Boxing Day. The Merseyside track has staged fixtures during the Christmas period […]

By Enda McElhinney
AP McCoy was, for a generation, the face of jumps racing but he could never quite manage to win the most famous race in a sport he dominated. Crowned champion jockey in Britain for 20 years running, McCoy tried and failed on plenty of occasions to win the Aintree Grand National. There was heartache and […]

By Enda McElhinney
Almost 50 years have gone by since Crisp became one of the most notorious Grand National runners-up of all time, and jockey Richard Pitman admits he still comes in for criticism even now. The big Australian chaser had won a Queen Mother Champion Chase at the Cheltenham Festival in 1971, but couldn’t secure the Gold […]
Bookmaker Offers