Nicholls has the Game for Aintree challenge

The 2022 Randox Grand National has been earmarked by Paul Nicholls as a long-term target for Topofthegame.

It’s more than two years since Topofthegame was sighted on a racetrack but his trainer has clear plans for next season if he can get him back to full fitness.

Cheltenham winner on the sidelines

The Flemensfirth gelding was a smart hurdler, finishing second in the 2018 Coral Cup at Cheltenham, but he really came into his own the following season when sent novice chasing.

He gained silver medals behind Defi Du Seuil over 2m3f at Exeter on his bow over the larger obstacles and then behind the mare La Bague Au Roi in the Grade 1 Kauto Start Novices’ Chase at Kempton on Boxing Day 2018.

Nicholls gave him a rest and went straight to Cheltenham where Topofthegame rewarded his patience with a strong surge up the hill to get the better of Santini and Delta Work in the RSA Chase (now Brown Advisory Chase).

A month later he was second to Lostintranslation in the Mildmay Novices’ Chase at Aintree and that remains his most recent appearance.

Nicholls, set to be crowned Britain’s champion trainer for the 12th time at Sandown this weekend, had once considered Topofthegame to be a possible Gold Cup contender.

Missing two years of his career has surely shattered that Blue Riband dream but his trainer is now deviating towards Aintree instead.

He had targeted the Ladbrokes Trophy at Newbury back in November as a possible aim before a setback caused him to lift stumps with Topofthegame this season, and Nicholls has once more put that mid-winter target on the board.

“He’s fine and the plan would be for him to come in on July 1st and aim him again at the Ladbrokes Trophy,” Nicholls told Great British Racing.

Aintree the plan for now 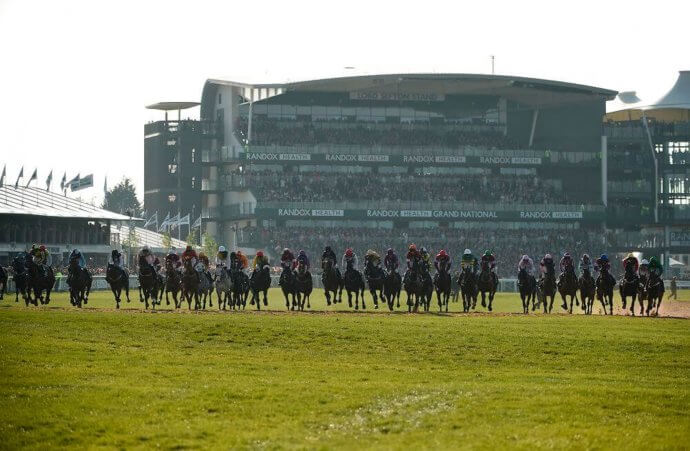 RACING-ENG-NATIONAL Jockeys ride their horses after starting the Grand National Handicap Chase horse race on the final day of the Grand National Festival at Aintree Racecourse in Liverpool, north west England on April 6, 2019. Tiger Roll put his name alongside legend Red Rum on Saturday winning back to back Grand Nationals in stunning style. The 4-1 favourite, superbly ridden by Davy Russell, took up the running at the last fence and although 66-1 outsider Magic of Light came back at him the nine-year-old had enough to spare to emulate Red Rums feat in 1973-74. Oli SCARFF / AFP

Nicholls’ only Grand National winner came in 2012 when the grey Neptune Collonges famously won by a nose from Sunnyhillboy in one of the closest finishes in modern times.

He freely admits that races like the Gold Cup have probably now gone for Topofthegame, and is therefore content to refocus on Aintree for 2022. Getting there will be ‘a challenge’ but it’s one that Nicholls is happy to stick on his long-term aims.

“Now he’s a bit older this year and has had a few problems – in my view, the race to train him for would be the National,” he added.
“I think he would be fantastic round Aintree as he’s got some class.

“My aim is to try to get him back on track and have a good crack at trying to win the National with him.

By Enda McElhinney
Aintree’s clerk of the course Sulekha Varma believes the decision to move the Grand Sefton Handicap Chase from December to November will assist trainers in their plans for the biggest race in the jumps calendar. One of just five races staged over the National fences during the season, the Grand Sefton has routinely been run […]
Bookmaker Offers