Many Grand National Hopefuls Set For Trial At Haydock 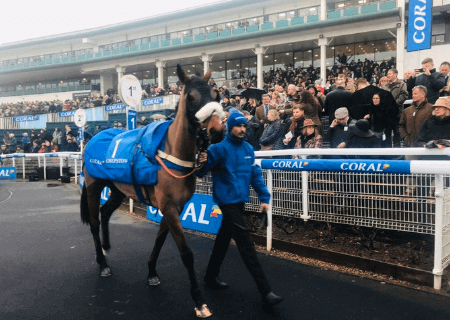 The race, which is run over 3m4½f, was first established in 1947 and took place at the Lancashire racecourse all the way through to 1984. In 1991, it returned to the racecourse and was rebranded as the Grand National Trial.

Red Rum and Party Politics have both won the Grand National Trial and the world’s most famous steeplechase at Aintree, however, neither did it in the same year. The latter was the last to do so. He scored in the Grand National in 1992, before coming out on top at Haydock the following February.

Elegant Escape has been tipped as a future Grand National winner ever since he prevailed in the Welsh equivalent of the marathon contest at Chepstow in 2018.

Colin Tizzard’s runner went off as the well-backed 9/4 favourite to defend his crown at the Welsh track last December. However, he had to settle for sixth place of the 17 runners in the race which was won by Potters Corner.

Off a mark of 162, Elegant Escape is the highest-rated horse in the Grand National Trial. He is 8/1* with the bookmakers to pick up his first success of the season at Haydock, while he is a 25/1* shot for victory in April at Aintree.

In 2018, Yala Enki produced one of the widest margins of success in this race’s history when he blew the field away by 54 lengths. Unfortunately, he did not have a Grand National entry that year, so he did not line up at Aintree.

Yala Enki returned to Haydock in 2019 but could only finish 6th in the race after starting as the 6/1* favourite. Since then he had had wind surgery and is now in Paul Nicholls’ yard.

The 10-year-old was back in the winner’s enclosure at Taunton last time out, scoring in a class two contest over 3m4½f. He remains off the same mark as that victory in Somerset.

Nicholls won the Grand National in 2012 with Neptune Collonges and he will be hoping Yala Enki can help him land the Aintree feature for the second time in his illustrious career.

Ramses De Teillee was denied by just ¾L in the Grand National Trial in 2019 when he finished behind Robinsfirth in a game performance. He hit the front four out and was only headed with 110 yards to go.

Connections of the grey will be confident he can go one place better this time at Haydock. He produced his best run for a while when he scored at Doncaster on his latest appearance. That victory came in a Grade Two contest over the extended 3m trip.

Trainer David Pipe won the Grand National in 2008 with Comply Or Die. His horse will be bidding to become only the second grey in the history of the Merseyside contest to come out on top in April.