The Isle of Man-based businessman has already tasted glory in the Merseyside marathon a -joint-record three times and he’s got his eyes firmly fixed on writing another chapter in Aintree folklore.

Hemmings has a trio of would-be pretenders in the line-up to don his famous green and yellow quartered silks come the Grand National.

Cloth Cap, trained by Jonjo O’Neill, is currently 48th in the list of entries and will carry 10st 5lb having been allotted a mark of 148 by the BHA handicapper Martin Greenwood this week.

For Hemmings, it’s Cloth Cap that will lead the charge come April 10th.

“Of my three entries this year, Cloth Cap would look to have the best chance,” said Hemmings after the weights were confirmed.
“We have two that should be in the race as they are number 13 (Lake View Lad) and number 46 (Cloth Cap) in the list. It usually goes down to about 80 to get a run and Deise Aba is 71. All being well, they should get in.

“Catherine, who looks after my business, came up with the name Cloth Cap. Everybody knows me in this cloth cap, although I have had to change it as my last one had a hole in it!” 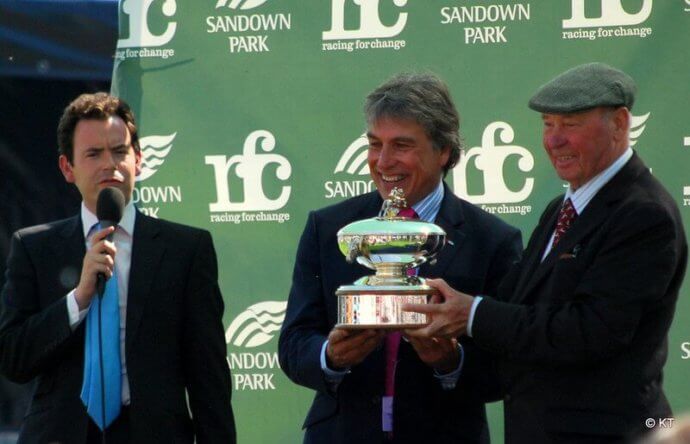 Hemmings has a long-standing association with the Grand National and Aintree. He has struck gold on Merseyside with Hedgehunter (2005), Ballabriggs (2011) and Many Clouds (2015) – trained respectively by Willie Mullins, Donald McCain Jr and Oliver Sherwood.

O’Leary could hope to score again with hat-trick seeking Tiger Roll this year, but Hemmings would dearly love to usurp the Ryanair boss and claim the record for himself, as he likened the race to the FA Cup Final as a world-renowned sporting event in its own right.

“The Grand National is the ultimate in my life as far I am concerned,” said Hemmings.

“That’s why I cherish Liverpool and that wonderful few days you can have in Grand National week.”

Having finished third behind subsequent King George winner Frodon on his comeback at Cheltenham in October, Cloth Cap was a decisive winner of the Ladbrokes Trophy at Newbury in November on his most recent start.

He’s been put up 12lb for the score and the nine-year-old is deemed likely to have a prep race in the coming weeks before his first taste of the Aintree experience.

“I am very happy with him. The important thing for him is the ground. He needs good ground,” said 2010 Grand National-winning trainer O’Neill.

“We were planning this last year really, but it didn’t happen. Unfortunately he just didn’t perform the way that we had hoped he would, but this year he came back in great form.

“He jumps and he stays well so the Grand National is the obvious race to go for. He has 10st 5lb, which is a really nice weight, and Trevor loves the race.

“We are hoping to get a prep race into him either at Kempton or Doncaster.”