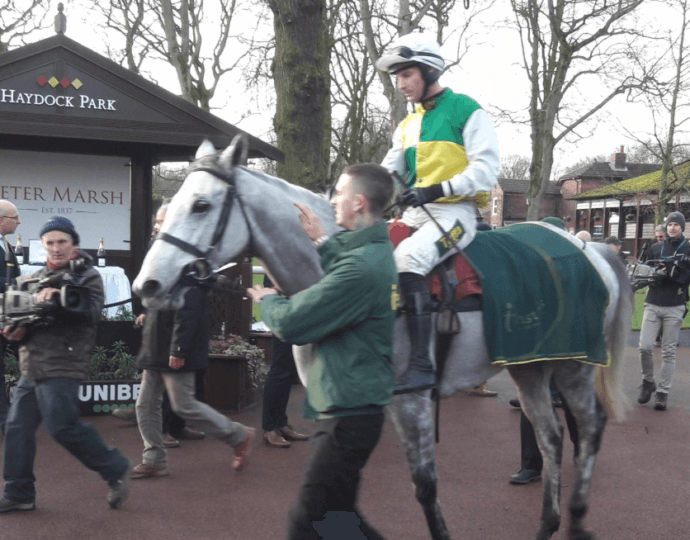 Trevor Hemmings is one of four owners who have won the Grand National three times and he will be aiming to hold that record outright following the 2020 renewal of the race.

Hedgehunter gave him his first victory in 2005 when he justified going off as the 7/1 favourite to score by 14 lengths in an impressive display.

The London-born businessman recorded his second win in the Aintree feature in 2011 when Ballabriggs carried his silks to success.

Four years later, the hat-trick was completed as Many Clouds got the better of Saint Are in a tight finish to the contest at the Merseyside track.

Hemmings could have three runners in the race this year as Vintage Clouds, Lake View Lad and Warriors Tale all hold entries and would have strong claims if they line up in April.

Vintage Clouds’ involvement in the 2019 Grand National did not last long as he came down at the first fence at Aintree after going off at 11/1 in the betting.

A second shot at the 4m2½f contest was looking unlikely this year until his recent victory in the Grade Two Peter Marsh Chase at Haydock. Sue Smith’s runner stayed on strongly in that contest, scoring by seven lengths.

The 2020 Grand National will be his third shot at the bigger fences if he is part of the 40-runner field. He also featured in the Becher Chase in Liverpool last December, where he was pulled up by regular jockey Danny Cook before the eighth obstacle.

Vintage Clouds is now 20/1* in the National betting and those odds could shorten further if he puts in a strong performance in the Grand National Trial at Haydock on February 15th.

Lake View Lad is also on course for his second shot at the Grand National this year. The Scottish-based horse was pulled up four out in 2019 after being hampered by a loose horse.

The former Grade Three winner has featured on three occasions this season. Despite not being able to record success, he has got better with each outing.
Nick Alexander’s runner finished third in the Ultima Handicap Chase at the Cheltenham Festival in 2019, where he was just over three lengths away from the winner Beware The Bear.

The grey horse is being primed to peak in April this season to give Hemmings another great opportunity of getting his hands on the Grand National trophy. The bookmakers rate him as a 33/1* shot this year.

Given the success he has already had over the bigger fences, the 2018 Grand Sefton winner Warriors Tale is a horse which must not be underestimated in the 2020 Grand National.

Paul Nicholls’ runner won around the Grand National course in the 2m5f contest two years ago. Unfortunately for his connections, he has been below his best in all three of his runs since then.

The 2019 Grand National was his second attempt at the world-famous steeplechase, however, just like 12 months earlier, he was unable to finish the course.

At 11 years old, Warriors Tale will not lack any experience. He has not featured since running at Aintree last April though, which is a concern. If he does have his third shot at the Grand National, where he is a 66/1* outsider, he will need to show much more over the marathon distance.

Hemmings’ name is already richly engraved in Grand National history but a fourth win in the Aintree feature will ensure he stands alone as the most successful owner ever in the race.