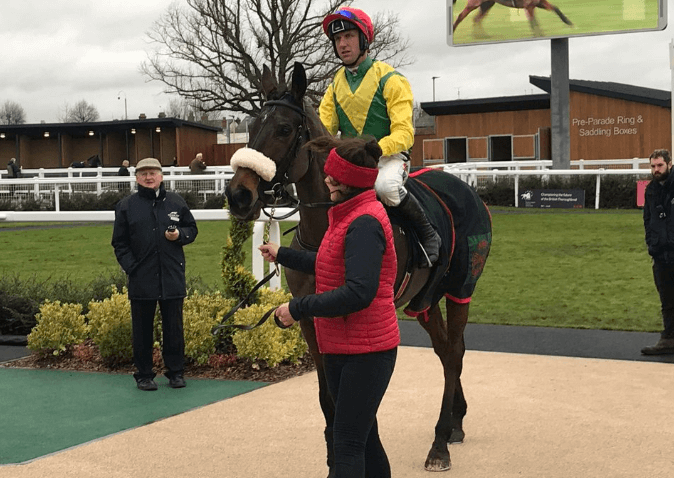 Magic of Light. Photo via @grahamclarke85

Jessica Harrington is content to allow Magic Of Light to take in the Mares’ Hurdle at the Cheltenham Festival en route back to Aintree for a second go at the Randox Health Grand National.

Last spring, Magic Of Light defied expectations as a 66/1 chance when she found only the brilliant Tiger Roll too strong in the Aintree showpiece.

Leading over the final fence, the mare met the obstacle wrong and looked to have run her race, but Magic Of Light regathered her effort on the long run to the winning line and held off Rathvinden in good style to take second spot; briefly giving Tiger Roll’s legion of followers a moment of concern.

She will have plenty going for her when she returns to Merseyside in April for a second challenge.

Now nine-years-old, Magic Of Light fits into the age profile that accounted for 15 of the last 20 Aintree Grand National winners.

She can also bid to join a group that includes Mon Mome, Silver Birch, Hedgehunter, Amberleigh House and Montys Pass; all having managed to land the famous prize having run in the contest a year previously without winning.

Magic Of Light is clearly a mare that takes her racing well. Last year’s Aintree run was her seventh of the term and fifth of the calendar year in 2019. Her trainer intends on keeping her busy again this spring.

Magic Of Light successfully defended her crown in a Grade Two Mares’ Hurdle at Ascot over the weekend.
Robbie Power’s mount made the running and fended off the challengers with a degree of ease.

She had previously won a Listed Mares’ Chase at Newbury in December on her second start back from a summer break.

“I was delighted with her. It sounds a funny thing to say because she’s nine now, but she does seem to be improving and Robert (Power) keeps saying she feels stronger than she was last year,” said the Moone-based trainer.

“She did it very well. We were worried about the heavy ground, as last year her improvement seemed to come when we got her on a bit better ground. Now she’s a bit stronger, she’s obviously coping with testing conditions much better.”

The Grade 1 Mares’ Hurdle on the opening day of the Cheltenham Festival – where Magic Of Light could square off against the likes of Benie Des Dieux, Honeysuckle and Apple’s Jade – is now firmly on the agenda.

There is likely to be a February stop before that, although Harrington is not overly keen on the Bobbyjo Chase at Fairyhouse, a race in which Magic Of Light unseated her rider last year.

It appears more like she will continue to do her racing in Britain between now and Aintree on April 4.

“We’ll have a look and see what there is. I believe there’s a mares’ chase at Exeter, so that could be an option and there’s also the Bobbyjo at Fairyhouse, but I’d probably rather run over fences in England – I just think the fences there are a bit more forgiving,” adding Gold Cup-winning trainer Harrington.

“We’ll run her somewhere in February, all being well, and then we’ll have a go at the Mares’ Hurdle in Cheltenham. I don’t know if she’s good enough to win that, but you’d have to say she’s up there with the better mares after her performance yesterday.

“After Cheltenham, roll on the Grand National again.”

Connections will be hoping that a ‘stronger’ version of Magic Of Light can feature prominently once more in the world’s greatest steeplechase, maybe even halting the hat-trick hopes of Tiger Roll.