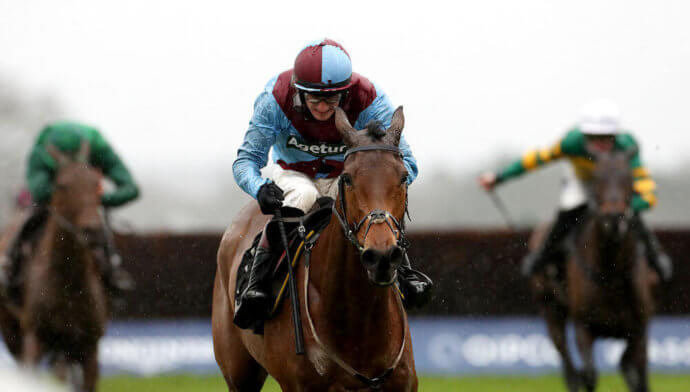 Ballyoptic returned to his best at Ascot yesterday with victory in the Keltbray Swinley Chase off top weight, scoring by eight lengths.

Nigel Twiston-Davies’ runner is expected to have his second shot at the Grand National in April and this latest performance will give his connections confidence that their horse can be in the mix at Aintree.

Ballyoptic hit the front after the fourth fence at the Berkshire racecourse and led the field for the rest of the contest. Many of his rivals struggled in the stamina-draining conditions in the final couple of furlongs but the gelding stayed on strongly.

The bookmakers reacted to his victory by cutting his odds to 25/1* from 50/1* for the Aintree feature later this season.

Ballyoptic was handed 10st-11lb by the handicapper at the official weight’s launch last Tuesday. That mark for the race will not change despite this performance.

Twiston-Davies is likely to give his horse some rest now before Aintree as he does not have entries at the 2020 Cheltenham Festival.

The season started in the perfect possible way for Ballyoptic as he was successful by ninth lengths at Chepstow in a 2m7½f contest. He then returned to action a month later to record a victory in the Grade Two Charlie Hall Chase.

That success at Wetherby was his second win at that level over fences. The field included La Bague Au Roi, Elegant Escape and Definitely Red, but it was Twiston-Davies’ chaser who was too strong at the finish back in November.

Ballyoptic stepped up to the highest level for the Grade One Betfair Chase on his next run in November. Unfortunately for those associated with him, he came back at the rear of the four runners at Haydock in the race which was won by Lostintranslation.

Will need to improve over Grand National fences

The race in April will be Ballyoptic’s fourth shot at the Grand National fences. He has only once been able to finish the course so far in his career.

In 2018, the 10-year-old had his first attempt at the bigger fences in the Becher Handicap Chase. He was slowly away in that race before falling at the 11th obstacle.

Ballyoptic was tipped by many pundits to improve in the 2019 Grand National over the longer trip of 4m2½f. He was in touch at the midway point but then came down four out when pushed along at the time.

The son of Old Vic featured in the Becher once again on his penultimate outing. Although he was a long way behind the leaders at the final fence, he was able to negotiate the course successfully.

Twiston-Davies knows all about Grand National success. He won the race in 1998 and 2002 with Earth Summit and Bindaree respectively.

Ballyoptic was second in the Scottish Grand National in 2018 where he finished just a nose behind Joe Farrell. He has also taken part in the Welsh Grand National, coming back sixth of 20 runners in 2018.

If Twiston-Davies is able to pick up his third Grand National win in April, it may well prove to be his most satisfying as it will come 18 years after his last victory in the world’s most famous steeplechase.