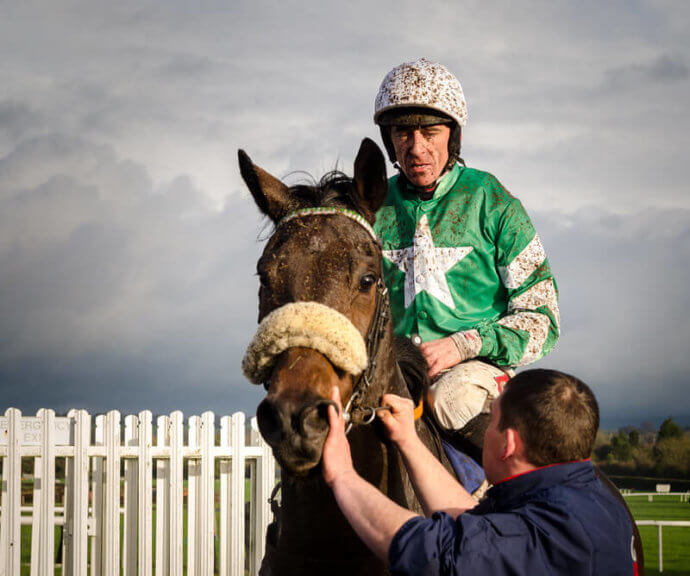 What makes Aintree unique? For one afternoon in the year, Aintree is the centre of national hunt racing as the unique demands of the Grand National grab the attention of the world.

Quite simply, there is no other race like it. The first distinguishing factor is the trip. The Grand National is run over four-miles-two-and-a-half-furlongs. It is a marathon trip that provides the ultimate test of stamina for horses.

Then come the challenging Aintree fences, renowned the world over for the demands they place on the Grand National field.

There are 16 fences to clear on the Grand National course and all but two are taken twice during the two circuits of Aintree that comprise the famous race.

The Chair – arguably racing’s most famous fence – and the water jump are taken just once in the race. The Chair marks the midway point in the race and is a real test for runners and riders as the ground on the landing side is six inches higher than on the take-off side – making it the opposite of most fences around Aintree.

Having negotiated the 30 obstacles safely, the Grand National concludes with a gruelling, energy sapping run to the finish line. The run-in is much longer than horses regularly experience and takes them past the famous Aintree elbow – an iconic moment in any Grand National.

Few names resonate with the Grand National as much as Red Rum, the only horse to win the race on three separate occasions.

Red Rum scored back-to-back wins in 1973 and 1974 before going to claim the prize again in 1977. Incredibly, he also finished runner-up in the two intervening years, ensuring he remains the epitome of what it is to be a ‘Grand National horse’.

Just before Red Rum, had come Foinavon in 1967 – one of the most infamous winners of the race.

Ridden by John Buckingham, Foinavon was a notoriously methodical – some might even say slow – jumper.

He was the beneficiary of pile-up at the 23rd fence where a loose horse impeded the front-runners causing untold carnage and allowing Foinavon to come through unchallenged, avoiding the trouble, before going on to win the race at odd of 100/1. The famous Foinavon fence remains as a testament to his win.

One of the more recent Grand National specialists was the Trevor Hemmings-owned Hedgehunter who won the race in 2005, a year after falling when challenging at the final fence. He returned in 2006 to finish second to Numbersixvalverde.

Of course, two-time defending champion Tiger Roll is now the equal of any of the great Aintree names of yore and will join Red Rum on three wins should he prevail again in 2020.

Ginger McCain’s name has been synonymous with the Grand National ever since the historic exploits of Red Rum. However McCain returned to win the race for a fourth time in 2004 with Amberleigh House – incredibly putting more than 30 years between his first and last Aintree wins.

The McCain odyssey continued in 2011 when Ginger’s son Donald saddled Ballabriggs to win.

The only man to match McCain’s tally of winners is Fred Rimell who trained four different horses to win the Grand National from 1956 to 1976 – ESB, Nicolaus Silver, Gay Trip and Rag Parade.

Jenny Pitman, with Corbiere in 1983 and Royal Athlete in 1995, as well as Nigel Twiston-Davies, with Earth Summit and Binderee (1998 & 2002), have managed to land double successes in the National but the great feats of Rimell and McCain remain unmatched in the modern era.

Tiger Roll’s trainer Gordon Elliott is now eyeing up a hat-trick himself in this fantastic steeplechase.

In 2015, Leighton Aspell wrote his name firmly into the history books when he became the first jockey since Red Rum’s pilot Brian Fletcher to win the Grand National in successive years.

Aspell partnered the Dr Richard Newland-trained Pineau De Re in 2014 before returning a year later to ride Many Clouds – who became the first horse ever to land the Hennessy Gold Cup/Grand National double following his success at Newbury.

Aspell joins a talented band of jockeys to have won the race on more than one occasion.

Among them are Carl Llewellyn who scored on Party Politics in 1992 and Earth Summit in 1998, Ruby Walsh who rode Papillon (2000) and Hedgehunter three years later and Richard Dunwoody who steered West Tip to victory in 1986 before getting Miinnehoma past the post first eight years later.

Walsh’s success on Papillon in 2000 was the second successive father/son jockey and trainer combination to win the Merseyside showpiece following on from Paul and Tommy Carberry’s win with Bobbyjo.

Arguably the most popular victory of all time came in 2010 when legendary rider AP McCoy finally won the Grand National at the 15th attempt on board the Jonjo O’Neill trained Don’t Push It.

McCoy had long been the darling of the racing public and seemed destined never to win the sport’s most daunting race especially following his misfortune in 2005 when Clan Royal got carried out by a loose horse at Becher’ Brook on the second circuit when leading the race.

McCoy eventually landed the prize five years later in the famous green and gold silks of owner JP McManus on what proved an emotionally charged afternoon at Aintree.

Can Davy Russell make it three-in-a-row on board Tiger Roll this year? They’ll be the first partnership to manage it if so.