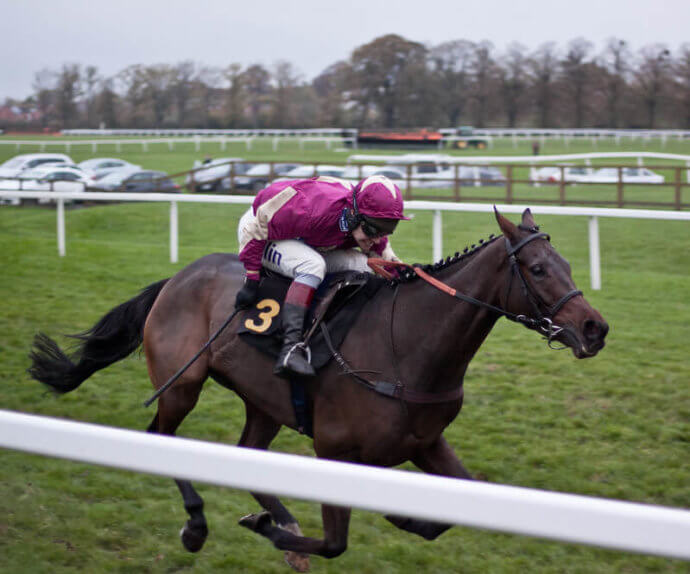 Champion Jockey Richard Johnson faces a race against time to be fit for the 2020 Randox Health Grand National after he broke his arm at Exeter yesterday.

Johnson came down after being unseated by Westend Story in a novice 2m3f handicap chase and was then trampled on by another horse.

The 42-year-old is set to have surgery either today on tomorrow to add a plate to his arm. A rehabilitation process will then be drawn up for the four-time Champion Jockey to help him make a full recovery.

Jockeys’ Championship defence looks all but over

The fall is likely to cost Johnson any chance of winning the Jump Jockeys’ Championship as he currently trails his rival Brian Hughes by three wins, a margin which is sure to widen considerably before he returns to the saddle in March at the earliest.

Johnson finished second behind Tony McCoy on 16 occasions in the Jockeys’ Championship but, since AP has been in retirement, he has won the title in each of the four seasons.

This injury is likely to mean that somebody other than Johnson or McCoy is going to get their hands on the trophy for the first time in 24 years.

Cheltenham Festival looks to be a big doubt

The immediate target for Johnson will be the Cheltenham Festival which begins on March 10. With a strong book of rides at the meeting, the Champion Jockey will be desperate to be in fit in time for the four-day event.

Johnson won the Cheltenham Gold Cup on board Looks Like Trouble in 2000. He was then successful for the second time in 2018 with Native River. If he does recover before the meeting in March, he is likely to partner the latter again as he bids to regain his crown in the 3m2f contest.

With 21 unsuccessful rides in the Grand National, Johnson has a record no jockey wants: the most appearances in the race without a win.

His first attempt at the famous steeplechase came in 1997 when he was unseated by Celtic Abbey in the contest which was won by Lord Gyllene.

Johnson failed to finish the Aintree feature in his next four appearances. In 2002, though, he was second with What’s Up Boys. The pair finished less than two lengths behind Bindaree in that year’s renewal on Merseyside.

The man who rode his 3,000th winner on the track in January 2016 matched his best finish in the 2016 Grand National with Balthazar King. He has featured in the race on three occasions with that horse.

Potential Grand National rides if fit in time for 2020 contest

Johnson is sure to have a number of options in the Grand National in April. Former Gold Cup winner Native River could have his first shot at the race and given the success he has had on the horse, he looks to be his most likely option.

Rock The Kasbah was Johnson’s 21st ride in the Grand National in 2019 but was brought down at the 18th fence. Philip Hobbs’ runner is also an option once again.

For now, racing fans will be hoping Johnson gets himself fit and healthy again for the bigger targets later in the season as those meetings will be much weaker without him involved.