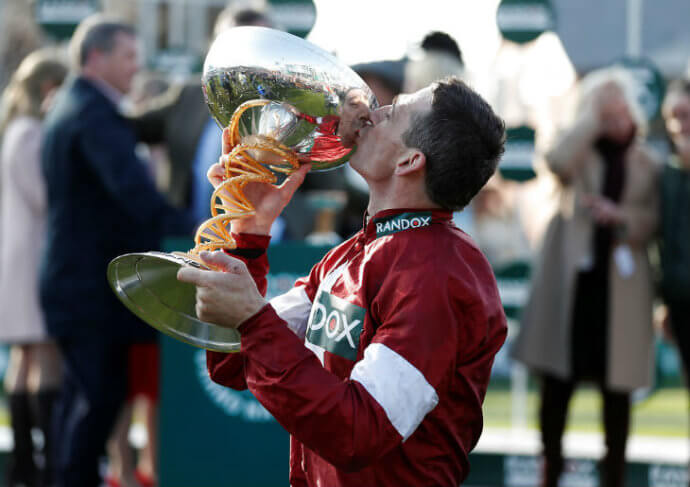 The most visible man in the Tiger Roll story is Davy Russell, the jockey that has steered the pocket-rocket to his back-to-back Randox Health Grand National wins.

Russell is the man on the front and back pages when the winning photos are taken, grinning from ear to ear. Trainer Gordon Elliott gets the horse ready and in shape for battle; while Michael O’Leary and his Gigginstown House Stud operation foot the bills.

But Russell is the man out there with Tiger Roll for four miles and more, negotiating the jumps and plotting the path around Aintree and into the history books.

It might not have been for the likeable Cork man however, after the most famous cup of tea in National Hunt racing.

Russell was the retained rider for Gigginstown’s powerful operation up until a shock change in tact back on New Year’s Eve 2013.

There were no signs of a falling out looming and the former Irish Champion jockey was as shocked as anyone when pulled in by O’Leary at Punchestown to hear the news.

Their conversation that afternoon has gone on to become the stuff of racing folklore.

“Michael asked me to come and have a cup of tea and then told me of his decision. I was shocked and had no idea it was going to happen,” said the rider at the time.

Losing such a high profile job could have been the breaking of a lesser character but many believe it was Russell’s handling of the unwanted situation that has stood to him over time.

He reflected on his own disappointment but never took issue with O’Leary or his decision. A hard-nosed businessman himself, the Ryanair boss saw something in Russell’s resilience that perhaps laid the foundation for their future success together.

“I’m a big boy, I know what I am going to have to do now and that is to work very hard. I still have a lot of belief in my own ability and am confident plenty of people will continue to use me.”

Time is a healer

The show had to go on. Russell was far from annexed by Gigginstown and, indeed, he took the ride on Tiger Roll at the 2014 Cheltenham Festival as they won the Triumph Hurdle together; thus beginning a stunning chapter of Cotswolds history for the horse that has since added a four-miler and two Cross Country wins at The Festival.

For Russell too the Cheltenham story continued to sparkle. The Youghal man rode at least one winner at every Cheltenham Festival from 2006 through to 2019; an incredible feat.

His Gigginstown sacking was a distant memory in March 2014 when he gave a masterclass ride in the Gold Cup itself to hunt Lord Windermere to victory in a four-way go for the winning post, giving trainer Jim Culloty another memorable Cotswolds afternoon.

As recently as November 2019, Russell used his Star Sports column to quash rumours of a rift with Gigginstown, for whom he has continued to ride when required through the six years since he was ‘sacked over a cup of tea’.

He wrote: “There has been plenty written and said over the last few days about my relationship with Gigginstown and because I ride a few for them this weekend I am now supposedly ‘back in favour’.

“As I have said all along, there was never a falling out and they use a big pool of very talented jockeys.

“It’s completely up to them who they choose to be on their horses and, from my point of view, I’m just delighted to ride them when asked.”

The Book Of Wisdom tells us that “the virtuous person, though he die before his time, will find rest”.

The relationship between Davy Russell and Gigginstown could easily have died before its time. The jockey drank his tea and refused to be broken by what was a hammer blow as 2014 rolled around.

A career-defining moment, Russell chose virtue over anger or resentment at the lowest ebb in his career. He rebuilt himself, vowed to work harder than before and get better than ever in the saddle.

Tiger Roll is surely the horse that most serves to reward that commendable decision. Their partnership is now the stuff of racing folklore, with more potentially to come yet.

Once scorned over a lonely cup of tea, Russell now drinks from the cup of success and has yielded for Gigginstown the most glorious chapter in their own racing tale.