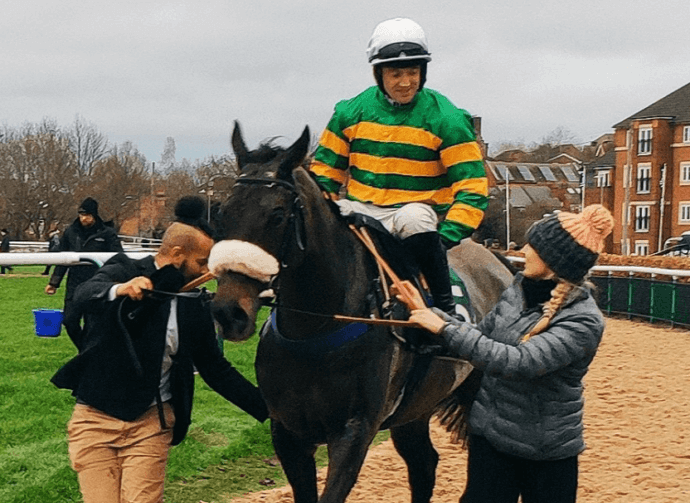 Trainer Tom Lacey says he is happy to send Kimberlite Candy straight to Aintree for the Randox Health Grand National without another run.

Racing off a mark of 140, Richie McLernon’s mount was ridden patiently as Harry Skelton and Captain Chaos set off and made the Grade 3 handicap a proper stamina test.

At the end of their three-mile and five-furlong journey, Kimberlite Candy had enough in reserve to take over at the head of affairs and go some ten-lengths clear at the winning line.

If he lines up at Aintree on April 4th, Kimberlite Candy will have the chance to become the second Classic Chase winner in four years to go on and grab Grand National glory in the same season; with Lucinda Russell’s One For Arthur taking the Warwick race in 2017 en route to Merseyside.

Auroras Encore, the 2013 National winner, had finished fifth in the Warwick contest earlier that spring.

Aintree experience a plus

Kimberlite Candy was a clear second-best behind Walk In The Mill before Christmas in the Becher Chase at Aintree. One For Arthur had managed fifth in the same contest in his ‘National season’.

With Aintree regulars Definitly Red, the aforementioned One For Arthur and Vieux Lion Rouge behind him in December, that Becher run is one that stands up to examination.

Now rated 150, Kimberlite Candy is almost assured of a place in the Aintree line-up, with a BHA rating of 142 having been good enough to sneak into the National line-up last year.

His trainer is content to make the Grand National his next start. He may even forego a racecourse gallop and set things up to test him at home instead.

“He’s in great nick. He’s fresh and well and will go straight to Aintree,” said Lacey.

“I don’t think we’ll go for a racecourse gallop. We’ll prepare him at home. We’ll see whether he goes to jump an Aintree-style fence. He jumped well round Aintree the last day.”

That all changed in 2010 when he teamed up with long-time allies AP McCoy and Jonjo O’Neill to get the win with Don’t Push It; thus quenching the career-long thirst of 20-times champion jockey McCoy to finally win the world’s most iconic jumps race.

The likes of Clan Royal and King Johns Castle had suffered their share of Aintree heartache before, while McManus was denied a second success in 2012 as the Paul Nicholls-trained Neptune Collonges inched out Sunnyhillboy in an unforgettable photo finish.

Shutthefrontdoor was much-touted in 2015 in the quest to make McCoy’s final ride in the National a fairytale story but he was only good enough for fifth spot behind Many Clouds. A year later he finished in ninth when Rule The World won.

Cause of Causes, second in 2017, Anibale Fly (fourth in 2018 and fifth last year) have made the frame in the famous green and gold hoops since but, so far, Don’t Push It remains the only ‘JP horse’ to win this great race.

McManus, as well as trainer Lacey, will be keeping fingers crossed they Kimberlite Candy can change that stat on April 4th.