Rachael Blackmore’s been making plenty of history for herself recently and fellow jockey Ella McCain says her landmark achievements are leading to female riders simply being ‘classed as normal jockeys’ as opposed to carrying a gender tag.

In March, 31-year-old Irish rider Blackmore was crowned leading rider at the Cheltenham Festival. It completed a week of firsts that began when she steered Honeysuckle to a memorable Champion Hurdle victory – becoming the first female rider to win the race – and ended with her being the first woman to top the Cheltenham riders’ charts at The Festival.

As it turned out, she was only getting started. In April, Blackmore partnered Minella Times to win the Grand National for her boss Henry De Bromhead in the famous green and gold silks of owner JP McManus.

Again, another first for a female but, more so than her Cheltenham heroics, glory at Aintree was a story that truly went worldwide as Blackmore’s image was thrust into the sporting limelight. 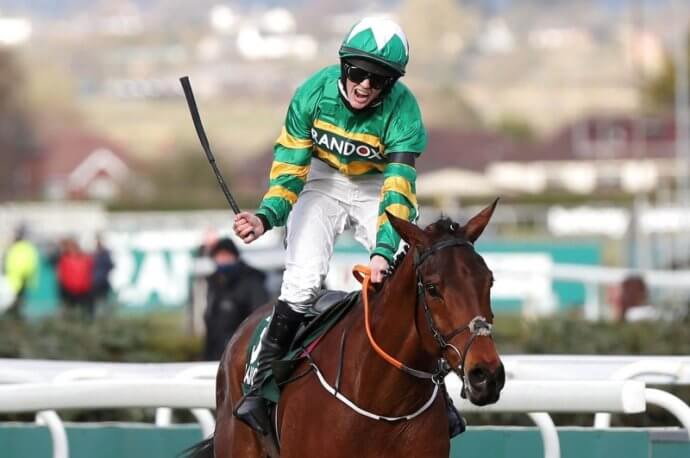 Horse racing is one of the few sports where male and female participants can compete on level terms. Only in recent times have female riders begun to shine on the biggest stages.

Irish Amateurs like Nina Carberry and Katie Walsh showed it can be done, whilst Bryony Frost and Lizzie Kelly raised the bar in the UK more recently. On the Flat, Hollie Doyle is the torch-bearer after taking bronze in the prestigious BBC Sports Personality of the Year awards for her 2020 efforts.

Ella McCain has never been far from horses in her life. She’s the daughter of trainer Donald McCain, and the granddaughter of the legendary Ginger – a man intrinsically linked with Aintree and the Grand National having famously trained the great Red Rum to three Grand National wins in the 1970s.

McCain, currently a claiming rider on the Flat, says Blackmore’s successes are breaking down barriers.

“I’ve grown up watching the Grand National and to finally see a female win it was just amazing” she told ITV. “I think we’ve got to the point now where we wouldn’t class ourselves as female jockeys, we’d just be classed as normal jockeys.”

Female numbers on the rise

Frost won the Grade 1 King George VI Chase at Christmas for boss Paul Nicholls and she remains a key member of the team at his Ditcheat yard as he reclaimed the title of champion trainer in Britain this season.

Great British Racing figures have revealed a 47 per-cent increase in the overall number of rides for female jockeys at the Cheltenham Festival since 2016.

“They’ve got someone they can aspire to be. There’s Rachael on the National Hunt scene and Hollie Doyle on the flat amongst others, so I think girls are going to realise it is achievable and it can happen.”

Lucy Cooper is part of the current intake and she was ‘Student of the Week’ at the college during April. She takes inspiration from Blackmore and Doyle – both key role models for aspiring female riders.

“I’ve always loved her and I’ve always looked up to Hollie Doyle as well. The females are doing it at the minute for us, but her win at the Grand National was like “wow, it’s our time now’,” says Cooper.