Grand National-winning jockey Rachael Blackmore says racing has found itself in a privileged position during the last 12 months of pandemic times.

While many sports have been forced to stall, or at least to change tact, racing has been able to continue uninterrupted since last June. With spectator-less sport the norm, racing has found itself in a shop window with plenty of television exposure bringing the sport to a new audience.

Happy to be a role model

After being crowned leading rider at the Cheltenham Festival in March, a win that catapulted her profile into the public domain, Blackmore hit new heights in April when she steered Minella Times to glory in the Randox Grand National at Aintree.

The Henry De Bromhead-trained winner, in the famous silks of owner JP McManus, soared to success as Blackmore became the first female jockey to win the world’s most iconic jumps race.

She remains keen to banish the gender issue, committed to being viewed only as another jockey, but the 31-year-old Irishwoman knows she’s a role model for young girls the length and breadth of Britain and Ireland now.

“It’s still quite difficult to think of myself as this role model for so many and it’s a very hard question for me to answer,” she said this week having become an ambassador for the 2021 Coca-Cola Thank You Fund.

“I’m just me, as opposed to Rachael Blackmore, but I’m certainly going to keep doing my best and if that inspires people then that’s brilliant.
“I’m going to keep enjoying myself doing it, because I love what I do and hopefully people see that.”

Racing to the fore

The spring of 2021 will be forever recalled as Blackmore’s time. She dominated at Cheltenham, winning the Champion Hurdle amongst a tally of six winners at the Festival, before the famous Aintree success that made headlines around the world.

Racing has been front and centre on the sports front during the Covid-19 pandemic. Blackmore is appreciative that her sport has been a positive for the general public in testing times.

“You know, the first thing that comes to mind is how grateful I am,” she adds.

“The position I am in now, I’m so privileged to be in. It has been such a strange year for everyone and so many people have struggled.

“So for us as a racing community it has been great to be able to get out there and provide that bit of something for people to look forward to.”

Banking on being recognised

Her new-found status as racing’s most recognisable rider means Blackmore is dealing with her increased profile.

While meeting her new legion of fans isn’t completely possible just yet amid the ongoing restrictions, she says it’s creeping into her everyday life.

“It’s mad – I was in the bank the other day, a bank I wouldn’t use normally,” continued Blackmore.

“The woman behind the counter didn’t need any ID from me when I’d always be asked; which was one of those examples of people knowing who I am. I still find it very strange.” 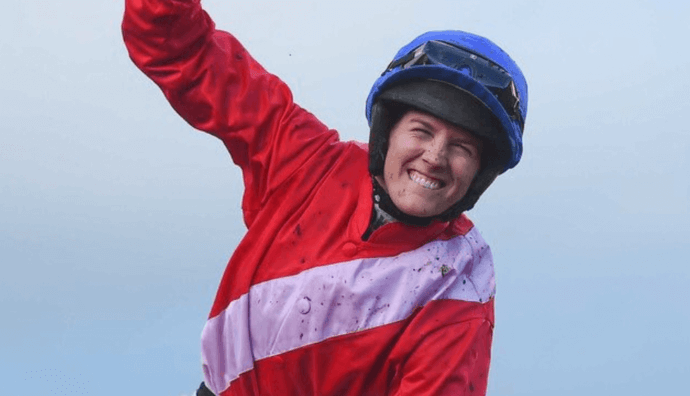