Arthur ready for ‘one for the road’ at Aintree 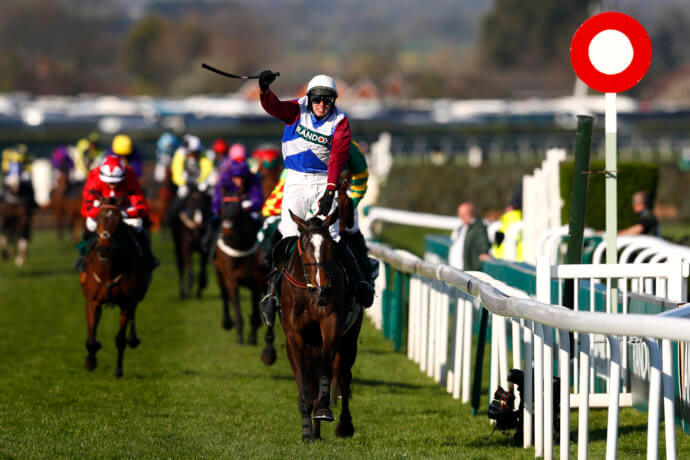 Lucinda Russell will aim for a run at either Haydock or Kelso during February as a final prep before One For Arthur tackles another Randox Health Grand National at Aintree.

Russell’s stable star became only the second Scottish-trained winner of the world’s greatest steeplechase back in 2017.

Derek Fox’s mount hit the front going down to the final jumping test and stayed the course strongly on the run to the line, holding off the Gordon Elliott-trained Cause Of Causes in second spot by more than four lengths.

On the comeback trail

One For Arthur has made just five competitive starts since landing the Aintree showpiece, including a sixth-place finish in last year’s National.

He had earlier failed to complete in both starts last season having missed out on 609 days after his big win on Merseyside.

This season he ran a pleasing race at Kelso on his comeback before taking fifth (of 18) in the Becher Chase behind Walk In The Mill on his return to Aintree.

The Edinburgh Gin Chase at Kelso on February 13th is currently being favoured over Haydock’s Grand National Trial two days later as a final stopping point for One For Arthur before April.

“His preferred option is the race at Kelso, but we’ve got snow here this morning and it makes sense to keep all bases covered.

“He seems in very good form. After the Becher we said we’d wait until the National weights come out before we run him again.”

Russell optimistic going back to Aintree

Elliott’s Tiger Roll remains the favourite to emulate Red Rum by winning the great race for a third time in early April, a feat that would see Gigginstown’s pocket-rocket go into the history books as the first to win three successive Aintree Nationals.

The weights for the race will be revealed on February 11 and Russell is optimistic that One For Arthur is trending towards being in excellent shape for his latest Aintree challenge.

The 10-year-old is showing good signs at home since the turn of the year.

“I actually think he ran better in the Becher this year than he did during the season he went on to win the National,” added the Kinross-based handler.

“We’ve been saying for a while we think he’s moving better and feels better this year. If we can keep him that way between now and April, I think we’ll go there with a great chance.”

Victory for One For Arthur in April would see him become the sixth 10-year-old to scoop the National since the turn of the century.

His owners, Belinda McClung and Debs Thomson – aka the ‘Two Golf Widows’ syndicate – made for a fine story at Aintree in 2017 having formed their small syndicate together as their respective husbands were often on the golf course at weekends.

Trainer Russell meanwhile revealed at that time that One For Arthur got his name from a can of Guinness.

“We’re not totally sure. We think he was named after Arthur Guinness,” said the trainer. “His name is still on the Guinness cans and people say I’ll have ‘One For Arthur’ or one for the road.”

By Enda McElhinney
Some form of normality is being predicted for the Aintree Grand National this year with the prize-fund boosted and a bumper crowd likely to descend on Merseyside. The Randox Grand National on April 9th is returning to its pre-pandemic value of £1 million, the racecourse has revealed, while a higher demand for tickets ‘than ever […]

By Enda McElhinney
Trainer Sam Thomas is non-committal on the hopes of Welsh National winner Iwilldoit lining up in the Aintree Grand National this spring, instead suggesting it might be 2023 before he rocks up on Merseyside. Iwilldoit, who turned nine on New Year’s Day, last week won the Chepstow showpiece in the hands of Stan Sheppard to […]

By Enda McElhinney
Gordon Elliott admits his dream is to see Tiger Roll land one more big success next spring, but the trainer concedes it’s asking a lot to anticipate that being a third Aintree Grand National. Elliott sees enough sparkle in the ‘horse of a lifetime’ to be dreaming of more glory, but completing an Aintree treble […]