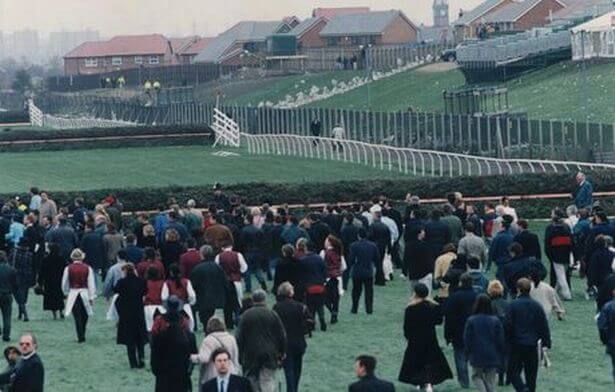 The 1997 Grand National, or Monday National as it will be forever known, was an event which caused chaos at Aintree. For the first time, the world’s most famous steeplechase was postponed and run two days later on the Monday.

Just under an hour before the 150th running of the race was about to start, two coded calls from the Irish Republic Army (IRA) were made to the police to warn them that a bomb had been planted at Aintree racecourse. That gave the police and race organisers no other option but to evacuate 60,000 away from the course.

When the race was rescheduled on the Monday, Lord Gyllene was successful for trainer Steve Brookshaw at odds of 14/1.

Given the size of the crowd at Aintree, it was the biggest evacuation of a sporting event in British history. Spectators, those working at the racecourse and connections of the horses had to leave behind their vehicles and personal possessions.

Clerk of the course Charles Bennett announced live on TV in an interview with Des Lynam that everybody, including the BBC, had to vacate the venue and that the race was postponed.

Initially racegoers were told to move from the grandstands onto the track, however, the police then requested that everybody had to leave the racecourse completely.

At 4.14pm, police carried out a controlled explosion to suspicious packages and any potential threat was neutralised.

The unfortunate incident led to the people of Liverpool coming to the rescue to help stranded spectators, many of which did not have a mode of transport to get home or a hotel to stay.

Many Liverpudlians opened their doors to offer a room for the night or weekend. Community centres, churches and sports centres also played their part in ensuring that nobody was left stranded on the street.

The initial estimation was that 10,000 would attend the rearranged contest. Organisers were pleasantly surprised when 20,000 people returned for the Monday running of the race, which took place exactly 49 hours after it was originally scheduled for.

Many of the horses which were at the course on the Saturday were moved to the nearby Haydock racecourse and housed there until the Monday.

Go Ballistic went off as the 7/1 favourite following his success in the Cheltenham Gold Cup at the Festival a month earlier. The race also included Suny Bay who had won the Grand National Trial at Haydock that season.

Lord Gyllene’s win was one of the widest margins of success in the modern era as the New Zealand-bred horse scored by 25 lengths. With Tony Dobbin on his back, the pair prevailed in a time of nine minutes and five seconds.

Further threats on the Monday

It later became clear that threats were also made on the Monday of the Grand National in 1997, although the police were confident they were just hoaxes.

The fact that the people of Liverpool, those participating and the spectators which turned up on the Monday were all willing to make sure the race was run was a big symbol of defiance to the terrorists.

Today the security at the Grand National meeting is as big as it has ever been. The Aintree contest is a huge event which is engraved in British culture, therefore, it remains a target for those looking to cause disruption.