Get a full breakdown of the 2006 Grand National won by Numbersixvalverde at an SP of 11/1. 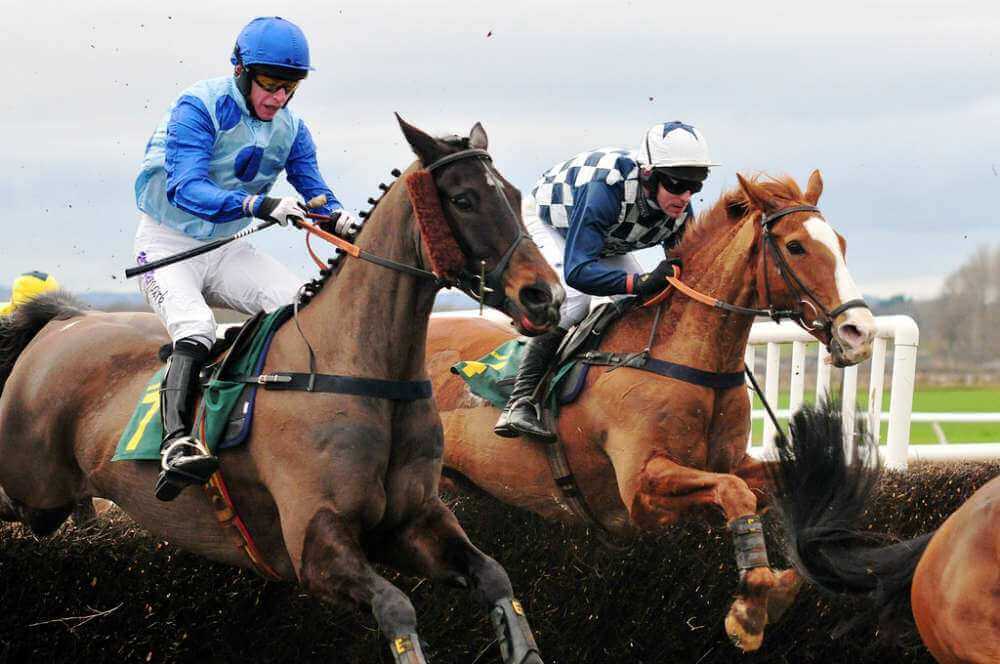 The 2006 Grand National began in dramatic fashion. A false start brought back memories of the race that never was in 1993. Thankfully, this time the riders all saw the flagmen’s signal in time and were able to turn back before they reached the first fence.

When the race did finally begin, there was further drama early on with five horses falling at the first. This included the well backed Innox and Juveigneur, and last year’s runner up, Royal Auclair.

Other notable early casualties included Ross Comm and Just In Debt. But plenty of the runners were still standing by the time the field charged towards the Chair. This was where we lost Silver Birch, who up until that point had seemed to be showing signs of something of a revival after his previous lackluster performances. Paul Nicholls had fitted a tongue tie to the horse before the race in the belief that his loss of form had been caused by a breathing problem.

Jack High, another soft ground specialist proven over extreme distances, also got no further than the Chair. He wasn’t travelling particularly well at the time and possibly wasn’t relishing the challenge. Heros Collonges, by contrast, was still going nicely when also coming down. It is ironic that three of the horses in the field most suited by the conditions on the day, all came to grief at this famous obstacle.

By the time the horses passed the winning post with a circuit to run, Puntal and Ballycassidy. had pulled nicely clear of their rivals and they were still in command as they approached Becher’s for a second time. However, Garvivonnian, Lord Of Illusion, Cornish Rebel and Amberleigh House had all been pulled by this point.

Despite winning over these fences earlier in the season, Garvivonnian didn’t seem to take to the obstacles at the 2006 Grand National. He was well behind when his jockey rightly called it a day.

Lord Of Illusion had jumped well and raced prominently for much of the first circuit. But the rain had turned conditions against him and he was pulled up after reportedly breaking a blood vessel.

Cornish Rebel was always going to either love the 2006 Grand National or hate it. Sadly, the latter appeared to be the case. He seemed to lose all confidence after being hampered at the first.

Amberleigh House for once failed to get round over a course he has come to love. He was not surprisingly retired after the race as age appears to have finally caught up with him. He’ll probably have relished this one last crack at the fences though and thankfully he returned in one piece to enjoy a well earned retirement. He has certainly secured his place amongst the legends of this great course.

Once Becher’s has been negotiated for a second time, the remaining jockeys start to dream of a 2006 Grand National victory and it is no coincidence that by this point many of the big guns had worked their way into contention.

Puntal and Ballycassidy were joined at the head of affairs by last year’s winner, Hedgehunter. A group containing the likes of Clan Royal, Numbersixvalverde, Nil Desperandum, Inca Trail, Therealbandit and Risk Accessor trailed just in behind.

It wasn’t long though, before Ballycassidy began to pull clear on his own as Puntal. Puntal had run well in this race in 2004 before going on to win that season’s Betfred Gold Cup. Injury had kept him off the course for more than 400 days before this seasonal reappearance and so he was entitled to get tired. However, he soon got a second wind and eventually ran on again at the death to finish a highly creditable sixth.

As is often the case, the complexion of the race changed completely after the field crossed the Canal Turn. They turned to face the row of fences along the side of the course for the final time, starting with Valentine’s. At this point, Ballycassidy was six lengths clear and still travelling strongly. However, he met the fence all wrong and took a crashing fall leaving connections wondering what might have been.

A group of six were clear going to the third-last. The veterans Rince Ri and Native Upmanship had had enough by this point, and First Gold had unseated his rider. Although, all three put up very creditable efforts given their age. Therealbandit was also falling back, despite running well for a long way. Richard Johnson had taken him wide throughout, but he made a couple of bad mistakes. Noticeably the water in front of the stands seemed to knock the stuffing out of him at crucial moments. He is another for whom this represented a welcome return to form.

Between the last two fences it looked as though we may get a classic National duel between the two best backed horses in the race and the two best jockeys to have graced the sport for many years. Ruby Walsh and Tony McCoy had both ridden patient races on their respective mounts, Hedgehunter and Clan Royal. Although the latter was lucky to survive a terrible blunder at the 19th. However, Clan Royal’s challenge petered out on the long run. Initially, it had appeared as though he had run out of steam on this stamina sapping ground. But actually, he started to close on the front two again after the Elbow to snatch third.

JP McManus’ charge now almost has as good a record over these fences as Amberleigh House. The one crucial difference though is that the big one still eludes him. Bad luck may have robbed him of victory in the previous two renewals, but he actually settled better than normal. This should have helped him see out the 2006 Grand National. His chance to win the race has probably gone now and it may just be that he isn’t quite good enough to win a race of this quality.

Hedgehunter put up a monstrous effort to nearly defer the record books and claim back to back success despite his welter burden. He was ridden in a very similar manner to last year, finding himself near the head of affairs by the time the field reached Becher’s for the second time. However, Ruby Walsh reported after the race that he wasn’t enjoying the ground. He knew he wouldn’t win after the field had cleared the first few obstacles.

Only one horse managed to beat him. A slight lack of stamina that seemed to cost him a famous victory. After his brilliant second in the Gold Cup, the handicapper may put him up further for next year’s race. But he couldn’t be ruled out, particularly on better ground.

While many punters’ eyes were locked on the duel developing between the heavyweights, the 2006 Grand National winner was creeping into contention, almost unnoticed. By the time the leaders were heading to the last, it was clear that Numbersixvalverde was travelling best. There was never any doubt about the horse seeing out his effort, given his past form over extreme distances on soft ground.

In many ways, this was the perfect Aintree performance. The horse never seemed to put a foot wrong at his fences. Although he was fortunate to escape trouble on several occasions. Notably, this happened at Becher’s first time round when It Takes Time almost fell in front of him. His jockey, Niall Madden, seemed to be able to put his horse wherever he wanted and the pair gradually worked their way into contention by the time the field reached Becher’s for the second time. From then onwards, he was always going well and in the end he simply outstayed his rivals.

A rematch between the first two again next year would be something to savour. Although you would worry about Numbersixvalverde’s ability to stay close enough to the pace on quickish ground.

Of the other finishers, last year’s sixth, Nil Desperandum, confirmed his liking for this race by finishing an excellent fourth. He seems to save his best for Aintree these days and his sound jumping certainly stands him in good stead. His connections felt that the rain might have been against him. But he has plenty of form on soft ground and he actually finished closer to the winner this year than last. In fact, even softer ground may make his lack of pace at the finish less of an issue.

Joes Edge, last year’s Scottish National winner, was within striking distance of the leaders on the run to Becher’s second time. But he gradually weakened on ground that wasn’t ideal for him. He is still young enough to come back and improve on this effort in the future.

Forest Gunner, who had had a season to forget before this race, seemed to be revived by these big fences. He gave Nina Carberry a great ride. As was the case last year, he failed to get home. Instead, he may be aimed at the Becher Chase instead next season. He was last of the nine finishers.

As it happened, the key to finding the winner in such a competitive field was appreciation of the ground. The rain that had fallen on the track since Friday’s racing made conditions much more taxing. Consequently, it was the strong stayer, Numbersixvalverde, whose previous four wins had all been on soft or heavy ground. This included in last year’s Irish National, where he won in a vintage renewal of this great race. See what jockey Martin Brassil had to say about the going here.

Get the 888 Grand National Betting Offer
Get Bonus

Get the Tote Grand National Betting Offer
Get Bonus

Get the Fansbet Grand National Betting Offer
Get Bonus

Get the Parimatch Grand National Betting Offer
Get Bonus

Get the Matchbook Grand National Betting Offer
Get Bonus

Get the Kwiff Grand National Betting Offer
Get Bonus

Get the BetVictor Grand National Betting Offer
Get Bonus

Get the William Hill Grand National Betting Offer
Get Bonus

Get the bet365 Grand National Betting Offer
Get Bonus

Get the Paddy Power Grand National Betting Offer
Get Bonus

Get the Betway Grand National Betting Offer
Get Bonus

Get the Unibet Grand National Betting Offer
Get Bonus

Get the Boylesports Grand National Betting Offer
Get Bonus

Get the Betfair Grand National Betting Offer
Get Bonus

Get the Coral Grand National Betting Offer
Get Bonus

Get the Betfred Grand National Betting Offer
Get Bonus

Get the Quinnbet Grand National Betting Offer
Get Bonus